Ha ha. Bet you were!

I really was ...! That's the thing , genuinely surprised , I mean the last time I used it a couple of weeks ago I was ready to launch it out the second floor window , it was really being ....., annoying for want of another word ! Thankfully I rarely use it , which is a shame as it used to be the hub of activity but my trusty ipad / iPhone / ipod combination have taken the lead roll now , all I wanted to do was print a simple doc and I was chuffed lol , the poor thing

I'm a long-time Windows guy (W 3.0), also proficient in Algol, Fortran, Honewell Assembly Language and Singer-Link GP4 Assembler. Back in my engineering apprenticeship (1960 or so), I even did some binary coding on a UK computer called DEUCE. It took up about 3500 square feet of office space and several tons of air conditioning capacity to do what a $20 scientific calculator can do easily these days.

My wife is the iPad person, as are just about all our grandkids. DW gave her ASUS Netbook an unintended shower in Pinot Grigio while it was powered up (after she got her iPad gift from the grand-kids - I think it was their Mom's company machine and they gave them away when they upgraded). Much spitz-und-sparken, no more netbook.

She decided, since she had the iPad already (I think it's a model 2, since it has two cameras - how can you determine for sure?) she would abandon Windows. Age would suggest it's not an "Air" and size that it's not a "Mini", but I can't find a label that says exactly what it is. We're gradually integrating it into our network. We need a new printer, since the elderly one I have doesn't handle Airprint. My eMachines tower is hooked up to it by a USB cable.

I'm too immersed in Windows (and used to a "proper" keyboard) to make the switch at my age, so I'll soldier on. I will be getting a Win 7 laptop shortly, as my tower is XP and isn't fast enough for W7. I'll be keeping the tower until it dies of old age, exclusively off the Internet, for running Quicken and doing photo-editing. That way, I don't need to buy a new version of Quicken and can isolate our family photo library from the **sholes who are breaking in, setting passwords on your photofiles and then demanding a ransom ($500 to $2000) or they'll delete them.

Go to general, settings, about and write the model number. Do a web lookup for the model number and it will tell you what color, how much memory etc. mine is a MD371LL and here is a search 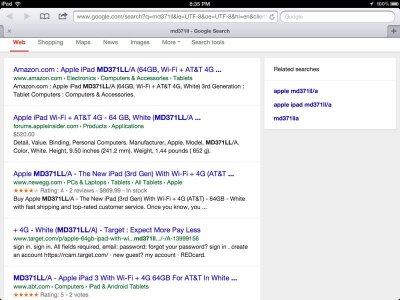 For the record it is a white, 3rd gen 64GB with cellular.

Mac at home and Mac at the office. YAY!!! I don't miss windows at all. When my iMac was delivered, all I had to do was plug it in and use it. I feel like I have a giant iPad as it is so quiet.

I would love an iMac.

I started with Windows, I had two high end laptops before I got my first MacBook Pro, I would never go back to Windows.

Hayles66 said:
I would love an iMac.
Click to expand...

Get one... It will probably last forever. Unless it dies on me, I am not buying a new computer.

poisonivy said:
I started with Windows, I had two high end laptops before I got my first MacBook Pro, I would never go back to Windows.
Click to expand...

Nope, I have not looked back since. Very well made products. My iPad2 will be 3 in August. Still works great!!!!

Yes, my daughters (used to be mine) ipad original is about 4 years old now and still going strong. Our iPod touch's are still going too, I think they are 2 generation.

You are correct. We find however as they add apple phones then iPads when they are due for an upgrade that Apple iMacs and MacBook products are on the list. We call it the halo effect.

Hayles66 said:
Yes, my daughters (used to be mine) ipad original is about 4 years old now and still going strong. Our iPod touch's are still going too, I think they are 2 generation.
Click to expand...

Apple makes very good products. My iPhone 4 is three years old and still works well. I am reluctant to give it up cuz of my grandfathered unlimited data plan LMAO.

tlbaker said:
Apple makes very good products. My iPhone 4 is three years old and still works well. I am reluctant to give it up cuz of my grandfathered unlimited data plan LMAO.

If it is AT&T they weren't making you give it up 4 months ago. Even a subsidized phone kept the unlimited data, ask them in an AT&T store. I don't know about other providers though.

My work require me to use windows, otherwise I use my MBP the rest of the time and also have parallel installed on it, but that's just for playing car racing games.


Sent from my iPad using Tapatalk HD
You must log in or register to reply here.