I still use Windows 10 on the Surface Pro 4 as my day to day device as I need to use Windows software and also I quite like having a powerful computer with the ability to write notes in OneNote but run all the software I need to run. I've given up on considering Apple OS X for my main computer. I have a Windows desktop too with an overclocked six core processor and about five drives in it as I do a lot of photo work using Lightroom.

The MBA my wife uses although I did have it as my work computer for mobile computing for a few years. I like it a lot but I also like the Surface, love it in fact mainly as it does everything i want it to do and it does it well.

I like Apple stuff though and the iPhone is great as is the iPad Pro. I think Apple though are dreaming if they think the iPad is any closer to replacing OS X or Windows 10 for most people and may well have painted themselves into a corner. My 2 cents.

I'm more of a Windows user. I have an Acer Veriton with Windows 10 installed, which I got for Christmas in 2015.
Z

I am a Windows user from the start yet i have many people in my circle you praise mac a lot and often advice me to buy a mac book or something.

I use a Windows machine with 8 installed it's about 3 years old. Always have done, no idea why though.
This one has English and German installed my other 2 do not, and are running Windows XP

I am a windows user on my desktop I have windows 10.

MacBook Pro user, I never ever would go back to Windows.

I was a Windows user when I joined this forum. Now I'm using a MacBook Pro at home, and Windows at work.

I used a Windows computer for four years before I got my first MacBook Pro in 2013.

Well, my vote was as a 'Mac User' but I never left a post on reviewing the thread - SO, I've lived in both worlds at different times. In 1980, our first computer was an Apple II+ w/ a second floppy drive (like shown below) and a $500 Hayes modem which allowed me to checkout my X-ray reports @ home via the dialup modem - that combination cost me $3000 then (or nearly $9000 in today's dollars!) - of course, this was on my fringe account - Susan thought that I was crazy, but after buying 'Peachy Writer' and an Epson dot matrix printer, she was in 'heaven' - plus, our 7 y/o son was enamored and is now an IT guy in Indianapolis.

In the mid-80s, my medical center decided on PCs, so switched to a clone running MS DOS and ended up w/ a LOT of Dell PCs at work and at home - thus, a DOS -> Windows guy for 25+ years - retired in 2011 and by early 2013, dumped our Dell PC w/ Windows XP and completely migrated to Apple products - now own an iMac, MBPro, MBAir, 2 iPads, & one iPhone 6 (used by Susan); also, an AirPort Extreme router - many reasons for changing but one was certainly getting RID of AV software. We have not looked back. Dave
. 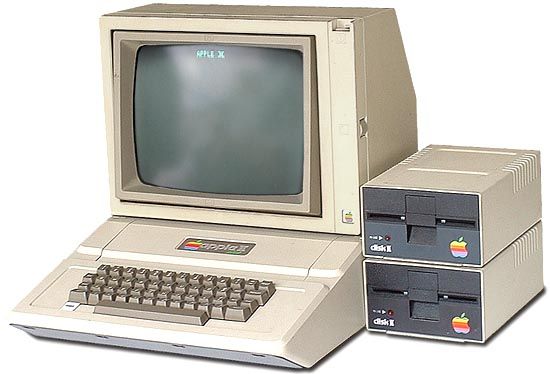 I am a windows user at home, but a mac user at work. The transition was really strange in the beginning, but you get used to it after a few days!
B

I actually use both a mac and a windows user. my personal pick? windows. why? do not ask. because the choice, it is so obvious. present the obvious reasons? i do not want to start a lengthy conversation where ill need to answer to mac fanboys owo. so yeah windows so far has been my go-to. albeit that win8 lol whew.. that was.. just NO. and except those win10 weird ass updates yeah windows is my thang

I used to be a Windows user, but influenced by the good experience of my first iPad I went for a MacBook four years ago.

I am a Windows user and have nothing against Mac, just never got into it because of the lack of software in the past. Macbooks have a strong reputation for quality build and battery life. macOS is very puzzling to me though but I heard it hardly freezes or crashes.

3 PCs..Windows Vista, 8.1, and 10 (hate that one)....Desperately wanting to play with the Mac OS, but no opportunity to do so...just for the experience. L

PrismStudios said:
3 PCs..Windows Vista, 8.1, and 10 (hate that one)....Desperately wanting to play with the Mac OS, but no opportunity to do so...just for the experience. L
Click to expand...

My oldest Windows computer runs Windows XP and my oldest Mac runs Mac OS X Panther.
You must log in or register to reply here.