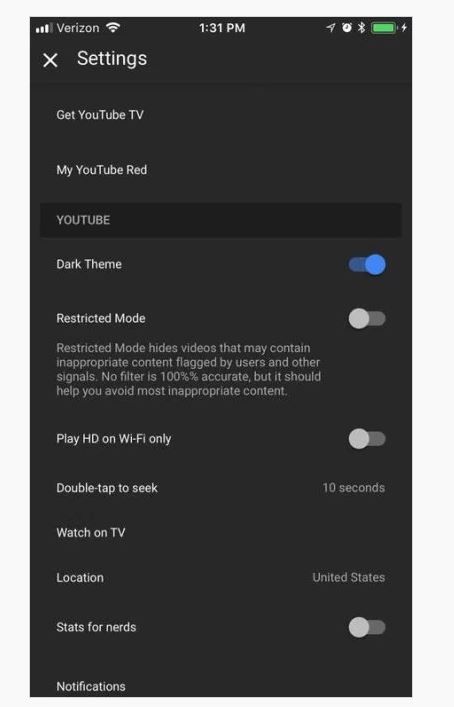 TechCrunch reports today that according to Reddit users, via MacRumors, YouTube is finally rolling out its recently introduced dark mode to its iOS apps. The dark mode first appeared last spring on the desktop version of YouTube as part of its overall redesign and speedier framework.

According to Reddit posters, while there has been no official announcement about the dark mode coming to the iOS YouTube app, some viewers have noticed it has appeared in the newly released YouTube iOS app update (13.0.1).

In order to activate the dark mode, which is called “Dark Theme,” once it has rolled out in your neck of the woods, all you have to do is access the YouTube app’s Settings screen, and you should find it above the setting for Restricted Mode.

However, while the mode is still rolling out, it seems that not everyone is finding it the same way. One Reddit poster said that they had managed to get the Dark Theme to show up in the app by force-closing and re-launching it, although TechCrunch says that method did not work for them. Another Reddit poster did not find the option to activate Dark Theme in the settings of the iOS YouTube app, but instead was prompted to activate it via a pop-up notification.

A dark mode has long been requested by YouTube users, with many thinking it is more restful and gentle on the eyes of the viewer. Some tests have even claimed that it saves battery life.

Source: A dark mode for YouTube’s mobile app is spotted in the wild
You must log in or register to reply here.