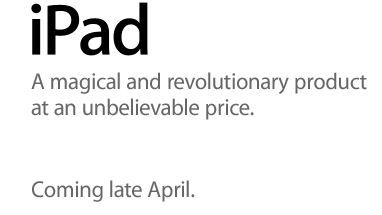 While the majority of pundits on the web seem to be predicting that the iPad will be released in the UK on Saturday April 24th, CNET UKâ€™s Crave gadget blog is reporting that the release date could well be Monday, April 26th. According to Crave, CNET UK has received information that a particular publisherâ€™s app team has been told to have their app ready for the 26th. Crave seems pretty certain about it too, even urging their readers to book that day off!

Apple, of course, declined to comment on either the release date or when they would actually be releasing the release date, which is really going overboard on the secrecy!

Itâ€™s getting so close to the end of April now that Iâ€™m starting to wonder if Apple wonâ€™t just release it suddenly as a surprise without telling anyone, kind of like they do with big apps in the app store sometimes. Put it on the UK shelves and websites and see if anyone notices!

I don't know - but in three weeks it will be April 28th - and there's a lot of people out there waiting on 3G's. They need to come out with some announcements. Maybe tomorrow at the press conference.

Here's to hoping the UK can get it soon so they can join us here at the site.

What's more frustrating is that like in Canada they won't say the prices and who's offering the 3G access...
G

Ditto the UK (and as far as I know, everywhere else... apart from the US)

If this is part of Apple's marketing campaign to keep people guessing, I don't like it! I've booked the 26th off from work, just in case!
You must log in or register to reply here.

Get BBC iPlayer on Your iPad

It's Official! iPad Available in US on April 3
2

Apple iPad Changing the Internet Before Itâ€™s Even Released