It's Official! iPad Available in US on April 3 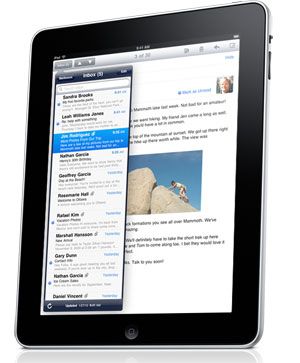 The release date has been officially been made by Apple this morning! The Apple iPad will be available in the US on April 3rd. Apple will also begin taking preorders March 12th! Read the full press release below:

Beginning a week from today, on March 12, US customers can pre-order both Wi-Fi and Wi-Fi + 3G models from Appleâ€™s online store (Apple) or reserve a Wi-Fi model to pick up on Saturday, April 3, at an Apple retail store.

â€œiPad is something completely new,â€ said Steve Jobs, Appleâ€™s CEO. â€œWeâ€™re excited for customers to get their hands on this magical and revolutionary product and connect with their apps and content in a more intimate, intuitive and fun way than ever before.â€

Starting at just $499, iPad lets users browse the web, read and send email, enjoy and share photos, watch videos, listen to music, play games, read ebooks and much more. iPad is just 0.5 inches thick and weighs just 1.5 poundsâ€”thinner and lighter than any laptop or netbookâ€”and delivers battery life of up to 10 hours.*

iPadâ€™s revolutionary Multi-Touchâ„¢ interface makes surfing the web an entirely new experience, dramatically more interactive and intimate than on a computer. You can read and send email on iPadâ€™s large screen and almost full-size â€œsoftâ€ keyboard or import photos from a MacÂ®, PC or digital camera, see them organized as albums, and enjoy and share them using iPadâ€™s elegant slideshows. iPad makes it easy to watch movies, TV shows and YouTube, all in HD, or flip through the pages of an ebook you downloaded from Appleâ€™s new iBookstore while listening to your music collection.

The App Store on iPad lets you wirelessly browse, buy and download new apps from the world's largest app store. iPad includes 12 new innovative apps designed especially for iPad and will run almost all of the more than 150,000 apps on the App Store, including apps already purchased for your iPhoneÂ® or iPod touchÂ®. Developers are already creating exciting new apps designed for iPad that take advantage of its Multi-Touch interface, large screen and high-quality graphics.

The iTunesÂ® Store gives iPad users access to the worldâ€™s most popular online music, TV and movie store with a catalog of over 12 million songs, over 55,000 TV episodes and over 8,500 films including over 2,500 in stunning high definition. All the apps and content you download on iPad from the App Store, iTunes Store and iBookstore will be automatically synced to your iTunes library the next time you connect with your computer.

iPad will be available in both Wi-Fi and Wi-Fi + 3G models in late April in Australia, Canada, France, Germany, Italy, Japan, Spain, Switzerland and the UK. International pricing will be announced in April. iPad will ship in additional countries later this year.

The iBooks app for iPad including Appleâ€™s iBookstore will be available as a free download from the App Store in the US on April 3, with additional countries added later this year.

Apple ignited the personal computer revolution in the 1970s with the Apple II and reinvented the personal computer in the 1980s with the Macintosh. Today, Apple continues to lead the industry in innovation with its award-winning computers, OS X operating system and iLife and professional applications. Apple is also spearheading the digital media revolution with its iPod portable music and video players and iTunes online store, and has entered the mobile phone market with its revolutionary iPhone.

Does the Saturday release date surprise you?

Though I'm not entirely shocked that the actual release is a couple of weeks behind the rumored date, I am kind of surprised that they chose a Saturday as opposed to a Friday. That's somewhat unusual for Apple.

I am pleased that you'll apparently be able to reserve a unit for pickup at your local Apple Store during the pre-order phase. I think I'll be doing exactly that!

in the past, I believe with iphone, a "reservation" did not guarantee that one would be waiting at the store for you

So when will the display models be out in the floor? I'm one of those still unlikely to buy first gen but I'd like to see what the differance between it
and iPod are first hand. Although I guess they likely won't let me try iTeleport VNC in store though... :-( .

This is great news to hear, a bit of a delay based on our rough estimated date but not bad at all.

What will Saturday mean for online delivery

I have to buy online because no store in area so I was wondering weather the Saturday opening date will slow down delivery for me.
L

Now comes my internal debate... which one to buy?

$499 because it will fit the majority of my needs, and as this is the first iteration of the device, I will have to buy a 2nd gen iPad next year so I can get the built in webcam sure to be in that one.

$829 the ultimate iPad, with no regrets I'd know I'd have all that it can be at this point at least, and if the iPhone OS 4.0 brings multitasking (more than one program open at once) I might need the best one out. Also, who knows what type of programs that might be coming out and how fast I'll fill up 64 gigs?

I really believe that in the future the 3g might be a wanted/necessity item, because of what Apple has up it's sleeve with the $1 billion data center they just built (say hello to the cloud and updates to MobileMe)

Why will the iPad ultimately work? Because it can be whatever the programmers dream up and release software for it to be!

End of april? Aww, crap... I wanted it for my birthday on the 4th. I'm only 40 miles from the border, fer crying out loud!

How do you sync the IPad?

Can you sync it with the same ITunes that yo sync your IPhone with or are they making a seperate IPad sync?

Yes, it syncs to iTunes. In fact, El Stevo said outright that you can use all of the iPhone apps you've already paid for on both your iPhone and iPad.
L

Yep, same sync, and the apps, music and movies you have on your iPhone will automatically transfer to your iPad, unless you choose not to do that...


ptmark said:
Can you sync it with the same ITunes that yo sync your IPhone with or are they making a seperate IPad sync?

And the Winner is


LarryT63 said:
Yep, same sync, and the apps, music and movies you have on your iPhone will automatically transfer to your iPad, unless you choose not to do that...


ptmark said:
Can you sync it with the same ITunes that yo sync your IPhone with or are they making a seperate IPad sync?

Apple bet on that point for make a big success .... and they are right just imagine a new device with OS you have to rebuy all app's you have that will not interest many people

By the way i believe Steve Balmer, Jef Bezos and Eric Schmidt doesn't have a good sleep last nigh :ipad-keyboard:
B

So if you "reserve" on online for the store and it does not guarantee you get one then whats the point? Am I missing something? :ipad-front:

BusterBear said:
So if you "reserve" on online for the store and it does not guarantee you get one then whats the point? Am I missing something? :ipad-front:
Click to expand...

We don't know how the reservation system will work yet. I'm thinking that's the route I'm going to take. It's better than taking my chances, though I really don't think they'll sell out. I'd like to be a little more sure that the model I want will be waiting for me.
You must log in or register to reply here.

One Million Apple iPads are SOLD!