Apple iPad Changing the Internet Before Itâ€™s Even Released 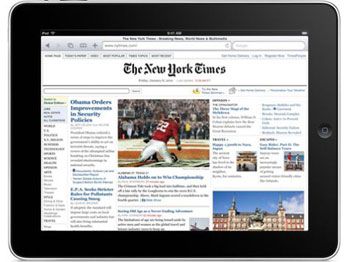 The fact that the iPad is going to be a massive game changer in so many different areas is not even up for dispute anymore, if indeed it ever was, and the effects are already being felt on the internet even before the iPad is released, according to Wiredâ€™s Epicenter blog. Epicenter says that the fact that the iPad doesnâ€™t use Flash, and therefore internet sites that use Flash wonâ€™t work properly on it, has prompted site developers to launch iPad-compatible web sites that use HTML5 rather than Flash. Epicenter says that such heavy-hitters as the NYT, WSJ and NPR are all launching iPad-friendly sites sans Flash, with pages optimized for reading on the iPadâ€™s screen. All three newspapers have also devised their own iPad apps.

Epicenter concludes by saying that the iPadâ€™s larger screen size ensures that it will have an even greater impact on the internet that the iPhone did, simply because developers donâ€™t have to worry about trying to fit everything onto the iPhoneâ€™s smaller screen and can therefore concentrate on building a full site with Flash-less video, rather than just an app.

By Maura Sutton
[Source: Wired.com]
B

Not being Flash enabled was, and still is a concern of mine but the desire to get "the latest toy" got the best of me.
But this is GREAT NEWS, let's hope most of the other major sites will follow.
You must log in or register to reply here.

Bill Gates Tells Larry King he likes the iPad, but itâ€™s â€œNot Quite There Yetâ€!

M
New iPadâ€™s Retina Display Was A Challenge for Manufacturers