strange ring at the top of my ipad

I had my iPad in my purse with the smart cover on. When I opened it, this is what I saw. What do you guys think could have happened? It doesn't wife off. I'm gonna take it to the apple store after class. 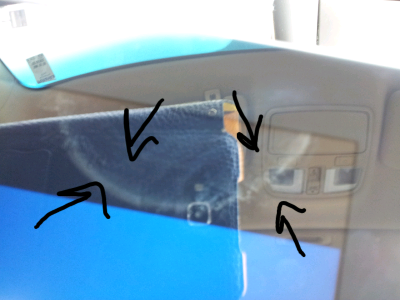 Looks like someone has placed a cup on it, :-( but AYS it won't wipe off so obviously that rules that out ;-)

It's certainly unusual, can only assume it's some fault in either the front glass or the digitizer glass which is immediately behind the front glass (that's necessary to decode the touch functions) , and behind that is the LCD panel itself.

Almost looks like a condensation mark which has formed, can't say I've ever seen anything like it before, I'm assuming of course you have not used a funny chemical to wipe the screen, which may have reacted to the screens coating, and even then the shape is intriguing.

I've replaced several iphone screens, and loads of screens for other smart phones and have never seen anything like this before, though I suspect some chemical has reacted badly or manifested itself on one of the 2 front glasses or maybe the LCD panel itself.

One thing is certain, it will need to be returned and replaced.
Last edited by a moderator: Mar 19, 2012
OP

Yup. I took it back to the apple store and they replaced it and switched out my sim card no problem.
You must log in or register to reply here.

IPad 3 no ring for face time