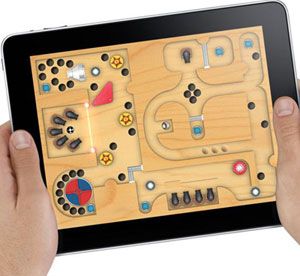 In a research report published today entitled â€œUsability of iPad Apps and Websites. First Research Findingsâ€, usability expert Jakob Nielsen looks at the usability of 34 iPad apps. He found that while the first generation of iPad apps are certainly regarded as â€œbeautifulâ€ by users, many users were also frustrated by trying to figure out where to touch in order to interact with them. â€œItâ€™s the Wild West all over again in interaction design,â€ said Nielsen, principal of Nielsen Norman Group. â€œWeâ€™re seeing the same thing we saw 17 years ago in Web design when anything a designer could draw could be a user interface whether it made sense or not. Thatâ€™s whatâ€™s happening with iPad apps. Anything you can show and touch can be a user interface on this device. There are no standards or expectations, and users just donâ€™t know what to do, or even what options exist.â€

Illustrating the problem of inconsistent interaction design, Nielsen Norman Group found that when study participants touched a picture or image, such as a logo, any of the following five results could happen in different iPad apps: nothing; the picture enlarges; it hyperlinks to a page with more detail; it flips over to reveal more pictures; or a set of navigation choices pops up.

The study found that user confusion was made even worse by the fact that the user interfaces on iPad apps are mostly hidden, which results in frequent accidental activations when touched by mistake. People also didnâ€™t know how to revert to the previous state because there is no consistent â€œundoâ€ feature like the Webâ€™s â€œBackâ€ button.
Study participants in Nielsen Norman Groupâ€™s research were observed interacting with 34 iPad apps, and in some cases with their related websites. Apps and sites such as AP News, Time Magazine, USA Today, ESPN.com, MLB and Nike.com were included in the study.

While most of us understand that it will be a while before most things get designed with iPads and touch screens in mind, it can be frustrating. My big complaint is when I try to scroll and whatever is highlighted. Version 1.0 of anything is such a bear.
A

Let me guess, in this study they were using monkeys...

After 5 seconds even in an unfamiliar app, most users can assimilate where most controls are and what is functional or not. Those users of iPhones and iPod Touches would be even more familiar, especially when moving to an app on the iPad that was previously used on the iPhone.

And do I need to mention the 99 year old (wonderful) woman that adorned our forums for so many days. Not to mention many I spoke to personally since the iPad release which say how intuitive the OS is and easy to use.

Please, studies like this belong in the back pages of Mad Magazine beside the X-Ray glasses. Preferably beneath such and add, that way I'm not "confused" that it may be an iPad app that's being advertised.

This study is total BS....A retarded 5 year old could figure out anything on the iPad....iWork so far is the only app that had a slight learning curve.

I can see there may be issues with some apps, but the overall UI experience is very good. Most apps are written by individuals or very small companies, so anything can happen within the apps UI environment.

While there is plenty of room for refinement in the iPad UI, it is quick and easy to learn and will only get better. Arrow keys and a forward delete button would be s huge improvement for me.....

"Usability Expert" lol. How do you get that title?

Seriously, I guess the UI standards will settle down. Page animations of all reading apps should be like iBooks, where to find "settings", "tools" and "back" should at least be the same when possible.

thank you gentlemen you have restored my faith in the normal people to be able to work a ipad ..

gentlefury said:
This study is total BS....A retarded 5 year old could figure out anything on the iPad....iWork so far is the only app that had a slight learning curve.
Click to expand...

Obama said he could not figure it out.
I

one more example (if we need it) one of my staff , he is the one quit the school around 11 yrs, ask to try one iPad as he see many of us like it … so we give him one totally empty … he ask one colleague how to install game … he explain him so he try by himself and he open and itunes account ( witch he even don’t know what is itunes) and install almost 30 free app’s … all of us be surprised , he say it’s easy to use this device he say it’s more simple than a computer …

so i decide to give him one and he will pay me back monthly ….

i cannot describe how he his happy with it la ….

my friends and i are haveing this go around about the ipad and where and how it will fall in the personal computering area..

i keep telling them the next ipad or the following unit will be the laptop kill for apple for personal use of the computer for the ipad will be able to do a lot more ..for everything apple learns now is going to be bult into the next unit or it might not be then next one that comes out but it going to happen .

most of the people now days do only six things on a computer i am told by a person works at advertising agency who track the socalled public buying of computer products along with how the person is going to be useing the computer for ..robbie tells me that most of the people who buy apple are for school use and heavy duty graphics design along with anytype of design production for diff type of items for the market and the people who by pc units falls into two areas business and personal use he says....

he says this are the six areas in which a person use the home computer for ..

4-plays a few games here and there ..

5-shop the web for diff items that they want ..

the main area for women are the following areas
cloths for the kids
print out adds for the grocery store
find deals in the local areas food stores
blogs about the diff things.
dvd and book sites
fanfare sites like the twilight fan site ..my girlfriend is really into that website .this is the first thing my girlfriend checks in the morning after getting up in the morning..she will sit down and check the diff post about the books and the movies...
online food shopping for some products can be found at a better price online than in the local stores

the main area for men are in the following areas
dvds and books sites
along with game release sites for new games comeing out and the reviews for them ..
adult websites.and do not say you do not look at them
shoping for diff things like a birthday gift for mom or dad that does not live close by or shopping for the wife or the kid
your forums that you belong like this one


6-basic downloading and burning music to cd or mp3 players .

a lot of my friends fall into the hardcore gamer types that will and can sit the whole weekend playing a one game online with three or four other people and that all they do all weekend sleep and play that game ..

gentlefury said:
This study is total BS....A retarded 5 year old could figure out anything on the iPad....iWork so far is the only app that had a slight learning curve.
Click to expand...

Obama said he could not figure it out.
Click to expand...

all right, lucky enough that he got enough smart people, who work for him...

Twitter Study Finds iPhone, iPad to be Among the Most Wanted Christmas Tech Gifts