Steve Jobs changing the world in a different way 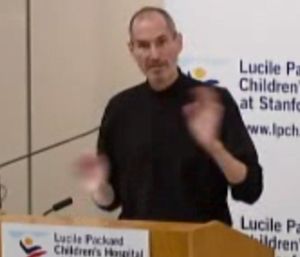 Steve Jobs is known for changing the landscape of the technology world, but now he's helping to improve the way organ donations are treated with a new bill. This coming week marks his one year anniversary for his liver transplant.

Jobs explained that last year in California there were 671 liver transplants and 3,400 people who needed new livers — 400 of whom died before they could get one. "I was almost one of the ones that died waiting for a liver in California last year," he told a group gathered at Stanford's Lucille Packard Children's Hospital.

The bill Jobs supports — SB 1395 — would require that the California motor vehicles department ask drivers applying for or renewing a license whether they want to become an organ donor. Today, Jobs said, "Nobody's going to ask you. Nobody's going to give you this opportunity."

In his remarks, Schwarzenegger said Jobs was instrumental in securing the governor's official support. "Steve Jobs told my wife about his transplant and she talked to me. Then we had great phone conversations back and forth. … He knew that others don't have a plane waiting for them to get to a transplant."
Click to expand...

Steve jobs needed a liver? Woah, i never knew that. I guess my teacher was right. You do learn something everyday.

Don't know how much truth there is to it though... if it can't be proved I won't put any weight in it.
G

DG~X said:
Steve jobs needed a liver? Woah, i never knew that. I guess my teacher was right. You do learn something everyday.
Click to expand...

No, actually he already got 2 livers....he's good for the moment.
You must log in or register to reply here.