Today Would Have Been Steve Jobs’s 62nd Birthday 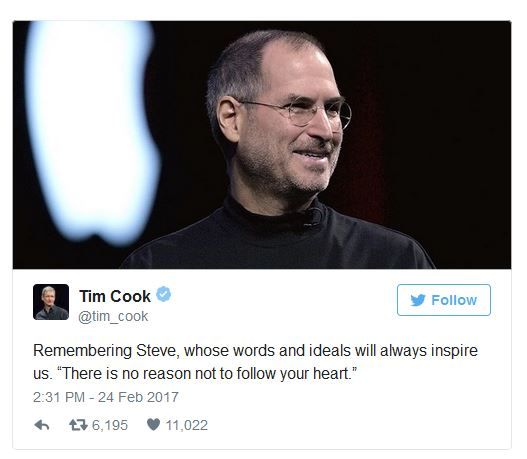 AppleInsider writes that current Apple CEO Tim Cook has today tweeted in honour of the late Apple co-founder and CEO Steve Jobs, who would have been 62 today.

“Remembering Steve, whose words and ideals will always inspire us. ‘There is no reason not to follow your heart,’” tweeted Cook.

Steve Jobs co-founded Apple with Steve Wozniak and Ronald Wayne in 1976, creating the Apple II and Macintosh. He resigned from Apple in 1985 due to internal politics within the company, but eventually returned triumphant in 1997.The rest, as they say, is history, with Jobs going on to turn Apple into one of the biggest companies in the world with visionary products such as the iMac, iPod, iPhone, and iPad. Cook took over as CEO in August 2011 when Jobs resigned, and Jobs died 6 months later in September 2011 from pancreatic cancer.

Earlier this week Apple also made the following announcement in a press release about the new Apple Park campus:

“Steve would have turned 62 this Friday, February 24. To honor his memory and his enduring influence on Apple and the world, the theater at Apple Park will be named the Steve Jobs Theater.”

Steve Jobs one of the biggest technology marvels of my generation. He will be missed.
You must log in or register to reply here.