iPad interest before and after 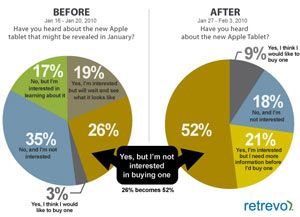 We've already had a few discussions on this site about your feelings on the iPad before the announcement vs after the announce (ie. http://www.ipadforums.net/ipad-general-discussions/169-did-ipad-disapoint-you.html). These discussions have all been anecdotal. However, the Retrevo blog has finally broken down this type of stuff statistically with a before and after study and the results are pretty striking.

Is this simply a case of the reality never being able to live up to the hype? What are your thoughts?

You can click through this link and read a bit more about some other interesting statistics from the survey as well: Apple iPad Hoopla Fails to Convince Buyers | Retrevo

Unfortunately, the media has picked up on this... never mind the fact that self selecting survey participants make the entire survey virtually worthless from a statistical point of view.

How many people have had a chance at a hands on demonstration? Personally about the only thing that really made me sit up and pay attetion during the keynote was when they pulled out iWorks and the possiblities that raised for other productivty tools.

But then you run smack dab into the hardware limitations, such as no built in USB port (even a micro-B). If Apple had shown off a streamlined inline adaptor that sat flush with iPad and what it could already do for the iPad (what data it could see and import) they would have had a better responce. Another deflection argument against including a card reader on the iPad would have again been very low cost adaptor componets and pointed out how quickly card types and standards change. SD, microSD, SDHC, SDXC, not to mention the unloved XD (have an Olympus camera that only takes those).

The old man in a comfortable leather chair was not the way to sell iPad. I don't think they showed enough of the possible buyers what the device could do for them. Saying "It Just Works" or that it is "The Best" doesn't make it so for people. The only way is to get these setup in hands on ways people will want to use them. Not that it will realy help bring back people who wanted a full OS and laptop replacement.

KiltedTim said:
Unfortunately, the media has picked up on this... never mind the fact that self selecting survey participants make the entire survey virtually worthless from a statistical point of view.
Click to expand...

Additionally, one need only remember the huge outpouring of bile on the interwebs during the first week after the iPad was announced to see where many of these self-selected poll respondents were coming from.
You must log in or register to reply here.

S
Apple iPad will bring up readers interest in reading!!