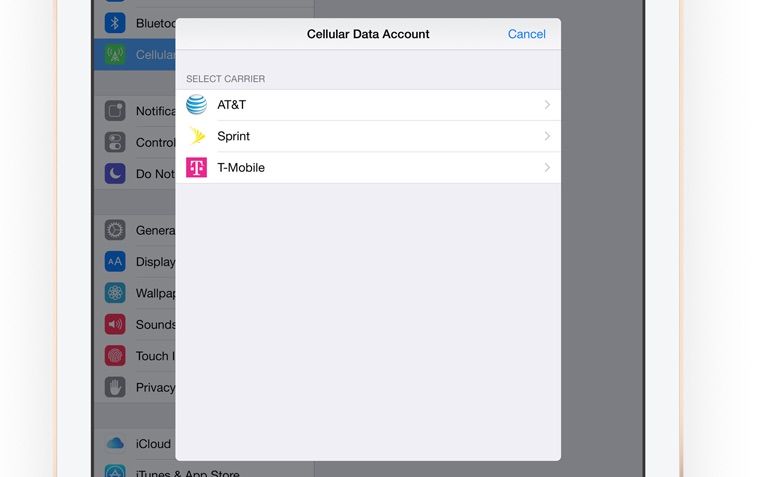 The Apple SIM allows users to easily move among AT&T, T-Mobile, and Sprint by taking advantage of short-term data plans. In the UK, the Apple SIM will work for now only with EE carrier.

What this means is that UK customers traveling abroad to the United States or US residents traveling to the UK can avoid paying hefty data roaming charges and just choose to switch carriers. Here's how Apple describes the new feature on its website:

" One SIM. Many options. The new Apple SIM is preinstalled on iPad Air 2 with Wi-Fi + Cellular models. The Apple SIM gives you the flexibility to choose from a variety of short-term plans from select carriers in the U.S. and UK right on your iPad. So whenever you need it, you can choose the plan that works best for you — with no long-term commitments. And when you travel, you may also be able to choose a data plan from a local carrier for the duration of your trip."

If Apple will continue developing this service to more carriers and countrie, then it could pose a potential threat to telecom players. However, Apple is still pretty dependent on carriers to sell its products, so maybe that's why they have decided not to talk about the new feature on-stage.

This is great news for the consumer anyways. You are no longer tied to one carrier and if you find a better deal with another one then you can switch instantly. Excellent!

Well, so far there are some good suggestions which I really appreciate but no solutions yet. I cut off all apps that might use cellar data, but still get the pop up notices wanting me to sign up for a data plan...even while I am at home using the WiFi at home...what is that all about. Surprised no one else is having this problem!? Finally, for those who have set up a plan (which I do not want to do), does it give you an option to cut it off or suspend it until you need it? Hope a solution pops up! Cheers, Bill

Oh, I or got to note that I started to sign up for a ATT data plan, but the screen advised that if i sinpgned up for ATT that I could not use one of the others at will, seems I'd have to reset the card or something...in other words, using ATT for my data plan overrides the other sources and the card can only be used for ATT. Has anyone else noticed this situation...?

s2mikey said:
This is great news for the consumer anyways. You are no longer tied to one carrier and if you find a better deal with another one then you can switch instantly. Excellent!
Click to expand...

...apparently this is not true if you sign up with ATT because it converts the SIM card into an exclusive ATT CARD and you cannot use another carrier according to the message I got when I tried to sign up with ATT. did any one else get this notice? This seems to defeat the purpose of what Apple says was a big advantage?!
You must log in or register to reply here.

M
AT & T to Subsidize iPad in US