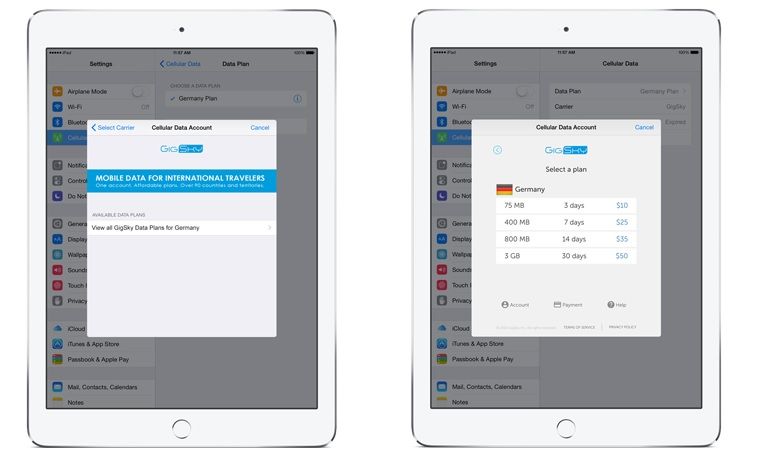 Apple has reached a partnership with mobile connectivity company GigSky in order to expand Apple SIM cellular data plans to over 90 countries around the world. Thus, from now on, iPad Air 2 and iPad mini 3 owners with an Apple SIM can now purchase short-term data plans while traveling throughout Europe, Asia-Pacific, Africa, South America and other regions worldwide. Follow the link at the end to check the entire list on Apple's website.

Ravi Rishy-Maharaj, Founder and CEO of GigSky, said the following:

"We're elated to offer iPad users a new way to stay connected around the world. iPad Air 2 and iPad mini 3 are thin, light and great for travel. Paired with GigSky's affordable mobile data service — easily accessible right from iPad with Apple SIM — travelers have the freedom to email, map and tweet wherever they go, without the usual challenges of connecting."

Apple SIM cellular data plans were previously limited to participating carriers in the United States and United Kingdom, including AT&T, Sprint and T-Mobile in the U.S. and EE in the U.K. GigSky cellular data plans are available on a pay-as-you-go basis with no long-term commitments, which is convenient for those who don't own an unlocked iPad.

Source: PR, Apple
You must log in or register to reply here.