What?!?! Apple iPad does have FLASH? 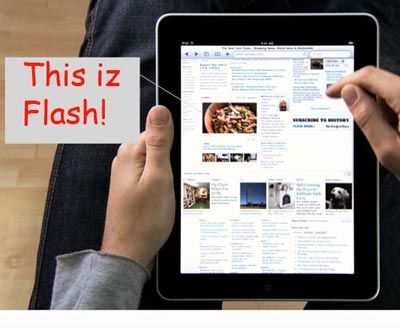 First of all, we have to give major credit to 9to5mac.com for breaking the news and putting 2 and 2 together. Reading through the forum discussions over the last few days, the lack of Flash was definitely a disappointed to many. We'll this breaking news might just be enough to turn that frown upside down!

In Apple’s official video the iPad, they show the New York Times being used. Looks pretty nice right? Well, unless the Times has a special iPad version of the site that converts Flash into jpegs or something, THE IPAD HAS FLASH. Normally, we’d say that Apple simply did the renders in the Mac version of Safari and just CG’ed it into the video. However, you can see the page rendering and being resolution independent as well, so it is likely being done on an iPad.
Click to expand...

Check out below how the New York times appear on an iPhone without flash. 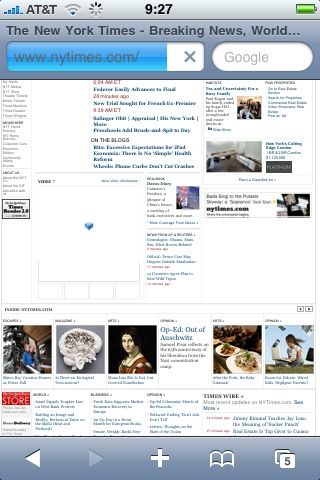 UPDATE: 9to5mac followed up and found out they were hi-res mockup/optimized pages used for the promotional material. Likely NO Flash.

looks like a picture from apple themselves. Its just a simple chop.

We clearly saw them pull this up at the key note event and it had a missing plug error.
OP

Looks like the same thing happened with the launch of the iPhone 3G:

Yesterday we pointed out an image on Apple's Web site that is indicative of an iPhone 3G displaying Adobe Flash content, but may have simply been a case of the company's graphic design team cropping a Desktop browser image to fit the device's screen. We've now discovered another bit of evidence that, albeit similarly speculative, would seem to show an iPhone 3G making use of Flash.
During Steve Jobs' keynote address, a speed test was conducted, pitting AT&T 3G speed against AT&T EDGE speed, both tests conducted on an iPhone 3G (one with 3G enabled, the other without). The site Jobs chose to render was nationalgeographic.com.

On current iPhones running OS 1.1.4, and in the iPhone Simulator included with the iPhone SDK, nationalgeographic.com renders with a picture of a cheetah and the message "This presentation requires Flash. Download free Flash player." On the keynote-demonstrated iPhone 3G, however, the site renders the same cheetah image without the "This presentation requires Flash" message. Interesting.

Of course, on a full-fledged Desktop browser with Adobe Flash, an interactive presentation is displayed in place of the cheetah image, so this (like yesterday's discovery) certainly does not confirm Flash on the iPhone. The situation is still curious though; did Apple edit the graphic on the National Geographic home page to delete the Flash warning? That seems awfully contrived, but not completely surprising.
Once again, judge for yourself:

I guess only time will tell..

it doesnt have flah grr i was sooo hyped about it when i first saw this post. then i looked at the homepage and saw "update: the iPad doesnt have flash"
i was like
Well i guess all my hopes of an iPad with flash just got slaughtered
L

The big players will have (some already have) alternatives for those detected using iphone/ipad. Dedicated apps will get around it, and as these devices show up more and more on website analytics, things will change, as you can't afford to alienate such a sizeable market.

If Apple stick to their guns and their products flourish, flash will just get pushed out of the equation. It's just a case of whether flash is that vital that browsing devices not supporting it can actually take off and dominate... I think they can on the back of the apps
You must log in or register to reply here.

M
See Flash and Silverlight running on the iPad!
2

M
Watch Flash Videos From This Week on iPad and iPhone, But Youâ€™ll Have to Pay for It!