Skype for the iPad 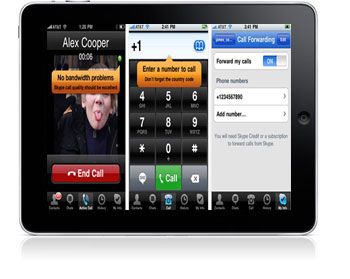 According to Skype's blog, it may be just a short time before the iPhone version of Skype will work over AT&T's 3G network. Skype also announced they are currently reviewing the iPad and it's specs. We should hear more in the months to come.

What does this have to do with calling over 3G? The SDK (Software Development Kit) which Apple provides to developers like Skype has been upgraded for the iPad. The new version, 3.2, removes the restrictions on calling over 3G, which is great news.

You may have seen other apps offering calls over 3G, but weâ€™re holding ours back for a little bit longer. Why? So that we can give you the very best audio quality we can. When our 3G-capable Skype for iPhone app is released, itâ€™ll let you make calls in wideband audio, giving you greater clarity and fidelity â€“ because thatâ€™s what you expect from Skype.
Click to expand...

Check out a video interview after the jump.

I believe I read somewhere that Apple (actually, more AT&T) just approved Sling over 3G, and VOIP over 3G so Skype is sure to follow.

Hey no worries, that's what we are here for! Yes, skype should work with the iPod Touch. You will need to purchase headphones that include a built in mic like:

The iPad will have a built in mic but should also work with the same type of setup.
You must log in or register to reply here.

M
Skype for iPad Out Now!
2