I hope someone can help me. I'm trying to remotely help my senior parents with their iPad mini. (I do not own one nor do I have access to it as they live far away.) They've done it before but can no longer find, during a Skype video call, how to change to use the rear facing camera. Does anyone know what I should be telling them to look for. Certainly just tapping on the Skype video camera icon just toggles the video on/off - and does not give a choice of cameras - as some searches suggest.

Is there anyone who might be able to help me? If you need model/versions/OS versions etc. I'd really appreciate you telling me how to get them to find this info so I can provide it. I do know that not too long ago they were prompted to allow an OS update - which they did - so I'd say that that is at least up to date.

This is a screen shot from Skype's video on the App Store. I belive the icon I circled at the top right is what you are looking for. 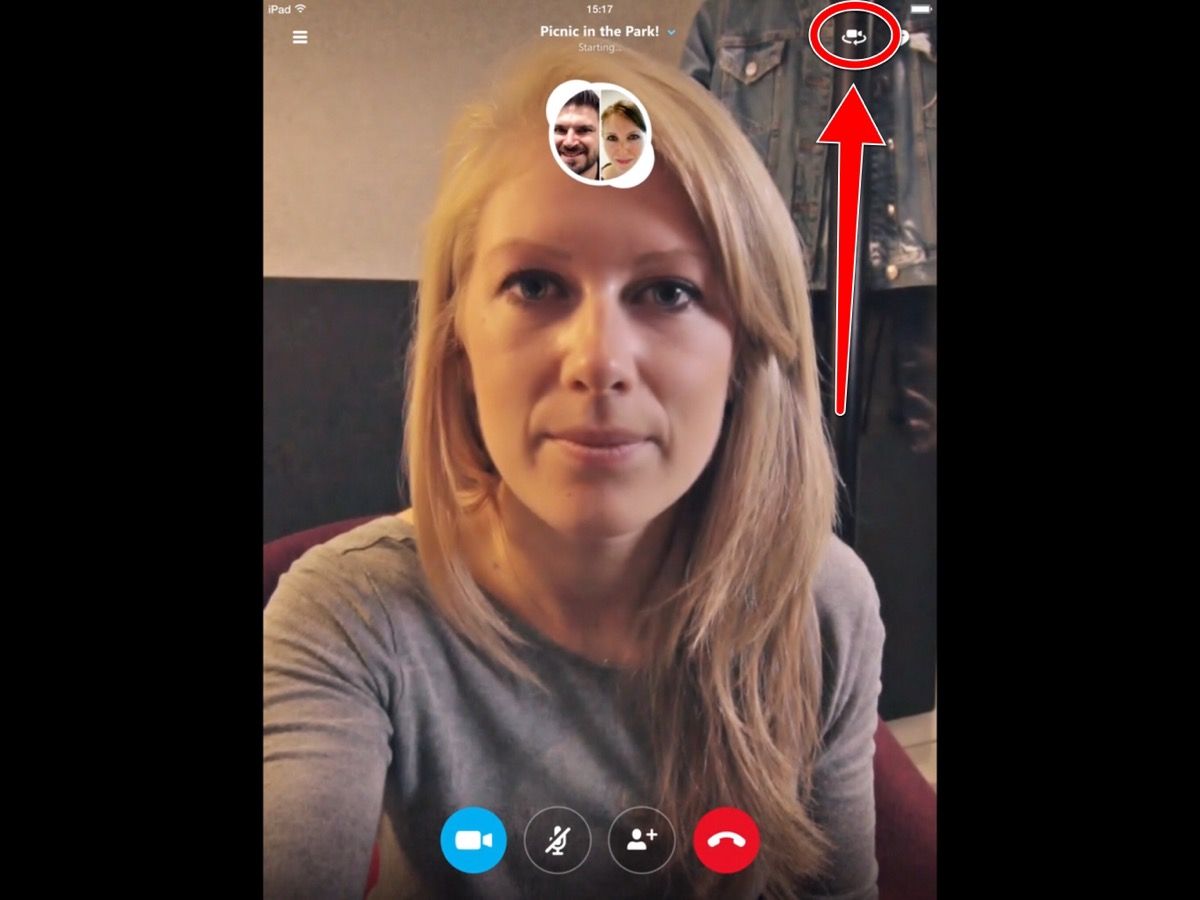 Thank you so much for your reply.

It's funny. That's the exact screenshot that I sent to them (I used an orange arrow instead of red) and they assure me they know what they're looking for (being able to see something similar when just using the camera app - for selfies and all) but it simply is not on the screen during a video chat. I verified that they have the latest version of Skype for iPad. (And that wasn't easy because somehow the App Store icon had disappeared! - resurrected it by Resetting the home screen layout - how it got messed up remains a mystery)

So if you have any other ideas, since the icon for which we search is gone, I'd appreciate it immensely.

Not having Skype, that's about the limit of my ability to troubleshoot. Hopefuly someone with more experience will chime in.
P

Hi cj14.
Just video Skyped with someone.
When I was viewing his image during the call I touched the screen and the icon you are looking for popped up near the top of screen.
Hope it does for you as well.
BTW I use iPad Mini 2, all up to date apps etc..
OP
C

Again much thanks for taking the time to respond.

I know the icon you speak of (and remember it from when I was at home playing with Dad's new toy) but I really do believe him when he says it just is not there anymore. In fact, I Skyped with Dad this afternoon and this time even the front camera did not transmit an image! I could tell he'd turned on Video chat because their Profile Pic (?) that always occupies center screen when we're just chatting disappeared but no video image ever appeared. He toggled the Video on and off a few times and the same thing each time - that pic disappeared and reappeared as it does (except usually when it disappears it's because the Video image starts to display). All of this is making me believe there are bigger problems afoot. I have read some very old Apple discussion threads (for eg My camera on iPad 2 will not switch from front ... | Official Apple Support Communities) where others had problems with the camera and Skype so I'm increasingly hopeless.

You don't happen to know any fancy resetting/rebooting/key-combination-holding tricks to make everything magically good again...do you? I am not an Apple owner/user and trying to be remote Tech support for this device is unbelievably frustrating!

Hi cj14.
Pretty hard to fix anything from where you are compared to the iPad!
So full marks for trying.
Have you done the normal reset?
Smiltaneously press and hold the "home" button and the "power" switch, until he apple logo appears. Remember it takes quite a few seconds. Then wait until the "startup" splash screen appears.
Then try to use it.
This trick fixes about 90% of bad stuff.
And or uninstall Skype and reinstal it.
You will need to know your father's Skype login details to get it to work after the re install..
After that perhaps a visit to the Apple Store.
P

Ooh. I'm excited to have anything to offer. No we certainly haven't tried a reset since we can barely figure out how to go "back" on the thing. (We're all used to the 'back' button on all our (gasp!) Android devices. Question: Can you confirm you do not lose any data with such a reset?

I will try to catch them at an opportune moment to get them to try it. When you get to a certain point in life, Technology should "just work" and when it doesn't the frustration is nearly unbearable. (And I'm talking about myself.)

I know that they have the latest version of Skype as I explained in the original question. We finally got the App Store icon to reappear (where did it go and why?) so then we could make as if to download it again - but it said it was the latest version. Would you be willing to tell me how to tell him how to uninstall it? (I think I could take it from there to install it again. And I do know their login stuff, thank goodness.)

I appreciate all of your help. I also understand entirely if you do not wish to keep typing answers to my ridiculous questions!

BTW, Dad's name is Peter too! I don't know too many Peters anymore. Pleased to meet you.

Hi cj14, To uninstall an App, all you have to do is press and hold the App until all the Apps start to jiggle. Tap the little x on the Skype App. It will ask you to confirm you want to delete it, so tap Delete. Then tap the Home Button which steadies all the jiggling Apps. I would turn the iPad off for a few minutes before redownloading Skype from the App Store. Hope that helps.
P

Hi cj and dad Peter.
Doing the "reset" as described looses nothing, just "resets" things.
Try the reset then the uninstall as described by Jupiter.
That should see everything going well.
Steve Jobs used to say: "Apple just works" alas he did not get everything right.
If you are coming off a PC base then iPads can be baffling.
It took me about 6 months useing iPad to even begin to like it a small bit.
OP
C

Sorry for the long delayed response. All troubleshooting got delayed by life and other crises.

I had sent your "Reset" steps to my dad. You'll join in the laughter when I tell you that he found some "Home" icon on the screen and held that along with something else (I suspect mistaking the actual Home button for a Power button?)....and wondered why no Apple logo ever appeared. I didn't know that (and presumed he had truly done a reset) so, when I was home over the weekend, I did a test Skype to myself from his tablet and the Camera turning icon was there and functional. Tada! Except when I asked him about the reset, I discovered that he hadn't actually done one.....so who knows why it was back working without a real Reset. When I showed him the icon and how it was working, he confirmed again that it was there but had not turned the camera when he touched it. Who knows.

I hate these kinds of mysteries but I wanted to give the tentative good news and my thanks.

If you will indulge one more question for clarification - as I anticipate future problems. Regarding the steps you listed to do a Reset:


"Smiltaneously press and hold the "home" button and the "power" switch, until he apple logo appears. Remember it takes quite a few seconds. Then wait until the "startup" splash screen appears."
​
I'd just like to know when to release the held buttons. I might have thought "hold...until the apple logo appears" (ie and then release) - but I'm wondering if I'm wrong because of your next sentence, "...Then wait until...". Do I release at the Apple appearance or not until something else happens? (As an aside, I don't actually know what a splash screen is either.)

As soon as you see the Apple logo, let go of the two buttons. There will be a short pause and then you will see the screen to put your passcode in.
P

I'm sorry I've been delinquent to also thank Jupiter7 for all your useful information. When I had the infernal thing in my hand last weekend, I did practice making the icons 'jiggle' .

I've been much appreciating any operational tips anyone has to offer so I can learn to operate a piece of technology I don't actually possess!
You must log in or register to reply here.

C
A couple of questions (SMS and Skype camera)