Should I use GarageBand?

Here's my main issue: I'm interested in using GarageBand to get into music, but I don't want to get locked into Apple's eco system.

I'm interested in getting into music production as a hobby, and want some kind of program to easily start making demos, maybe even start putting out content on YouTube or SoundCloud. Thing is, I'm mainly a Windows PC and Android phone user, and programs like FruityLoops are pretty expensive for anyone who isn't already a professional, and from what I've seen, open-source music production programs aren't all that good, not to mention that neither of them are very intuitive or easy to get into. GarageBand seems really intuitive and easy to get into and is free on Apple devices, and I am thinking of getting myself a tablet anyway, and in terms of tablets, Apple pretty much has everyone else beat (even a hipster like me, who's thinking of switching my PC to Linux, can admit that), so I could knock out two birds with one stone here: Get an iPad to use as a tablet, and then download GarageBand on that to start getting into music.

Here's where the problem comes in: From what I can gather, the iOS version of GarageBand can only export music in .m4a format, which is pretty much only used on Apple devices and uses a lossy codec to compress files. Sure, I could export the files as m4a and then convert them to .wav or .mp3 to make them more accessible elsewhere, but then I run the risk of losing audio quality on the already compressed audio. I saw somewhere that you *can* export from GarageBand iOS as .wav, but the language and word choices was confusing, and I couldn't tell if they meant you could export directly from iOS, or if you needed to convert it. I really don't want to get an iPad to use GarageBand, and then find out I need a Mac to *properly* export music in a lossless format that actually gets used. I detest Macs and refuse to get locked into Apple's ecosystem.

I haven't been able to find straight answers to my problem online, so I was hoping you guys could help: Is m4a usable outside of iTunes and GarageBand, and if so, is the audio quality good? Can I export files directly as .wav on GarageBand for iOS?

m4a is a variation of mp4. Most modern music players, even Windows player, will play this file without issues. The quality is similar to mp4, while achieving slightly smaller files. The quality options in GarageBand are Low Quality (64 kBt/s, Medium Quality (128 kBit/s, High Quality (192 kBit/s), and Highest Quality (256 kBits/s)

The m4p has a losses option. In Garage Band is is called Apple Lossless.

What you risk losing by starting with GarageBand are your raw project files. You can export a project file, and there are probably conversion apps available for other music apps, but I have no information on them. I would expect at least some lose of info when converting from GarageBand to another app. At the very least the instruments would be lost. I'm sure Apple's instruments are proprietary.

The only exception to this is probably Logic by Apple. GarageBand's big sibling. 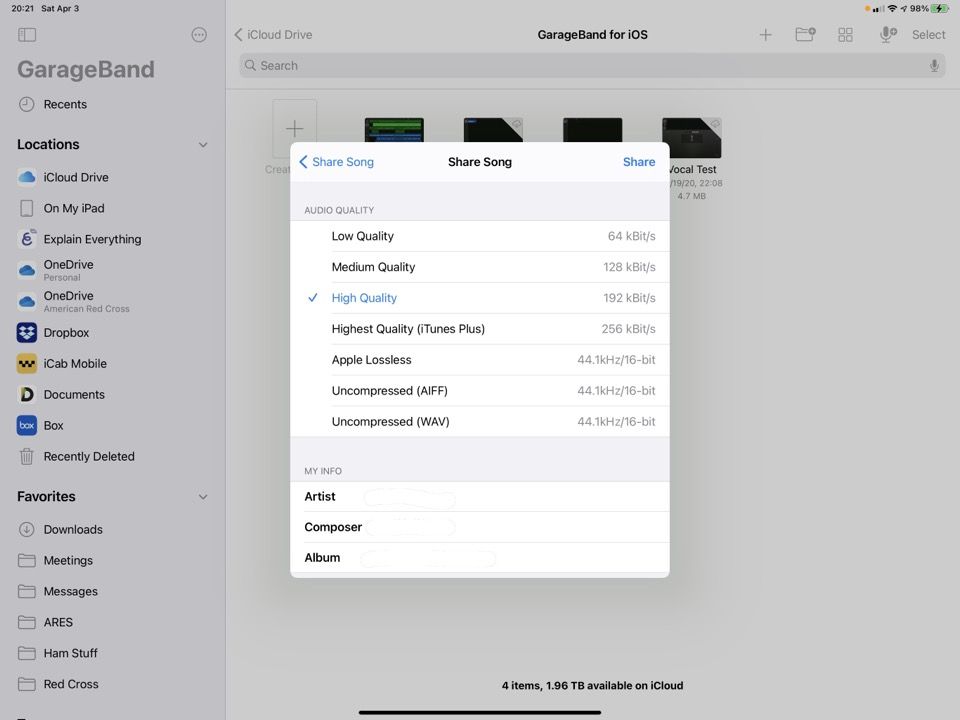