I have had an ipad 1 for a couple of years, no problems at all.
Got a new ipad 3 last weekend and most things work fine, no problem at all.

I have the 32 gig wifi version, and have synced music, video and apps no problem.

there is plenty of space on the ipad for the pictures selected.

Is it some kind of cache problem because i had these photos linked to an ipad 1??

I had the same problem. I ended up doing mine in 2 batches. It is interesting though because I have 3500 pictures and I made my first batch around 2500 which it did just fine. Try doing about 1500 then add the last 1k.
OP
C

Did not work for me, I have tried bringing it down to just a few hundred at a time, it just doesn't seem to work. Glad you got around your problem.

Have you got any idea what may be causing it?

What surprises me is it transferred 20 gig of other stuff without a hiccup at all.
N

My guess is there is a minor glitch that apple will fix in next release, if they realise it is there. Does anyone from apple read these boards?
B

cptkremmen said:
Did not work for me, I have tried bringing it down to just a few hundred at a time, it just doesn't seem to work. Glad you got around your problem.

Have you got any idea what may be causing it?

What surprises me is it transferred 20 gig of other stuff without a hiccup at all.
Click to expand...

I think it is a bug because my Ipad 2 was repaired and returned six weeks ago, before the new update, and it went fine.

Try unchecking the sync photos, sync it, recheck the box, and try another small batch.

I am also brand new to the "new" iPad. Heck, I'm brand new to anything beyond my desktop computer!!! I just followed the instructions for syncing with my desktop. Before I realized what I was doing I set it to copy all my pictures to the iPad. I do not want all my hundreds of pictures on my iPad. I tried to stop the sync. Tried to made changes and go backwards through the forms I had filled out ... wouldn't go back.

Before I break something - can you tell me how to delete the whole sync and start from scratch?

First, go to Preferences in iTunes on the computer. In the Devices tab turn off auto-sync. This will stop the iPad from trying to sync when you plug it into the computer.

This will remove all the photos from the iPad.

Take a look at this support page to get an idea of how photo syncing works before giving it another try.

For Windows users I recommend creating a folder just for syncing with the iPad. Inside this main folder create a folder for each album you want. Don't create any folders inside the album folders. iTunes will not recognize them. Place 'copies' of the pictures you want in each album/folder. That way you are free to move or delete the pictures without worrying about what happens to the originals.

Select the main folder you created when you set up syncing in iTunes. You can either sync all the albums/folder, or you can choose only specific albums/folders. If you have a lot of photos (in the thousands) I recommend choosing the selected albums mode, and only adding one or two per session.

To remove an album, just unselect it in iTunes and sync again.

To add or remove pictures from albums make the changes in the appropriate folder on the computer, then sync the iPad again.

You beat me to it Twerppoet
but you have answered it so much more eloquently than I ever could.
I'll be saving this for my records now! . Thank you.

Super!!! I've printed out your instructions and the ones in the site you included and I shall follow them to a "T." It looks somewhat daunting. I'm almost afraid to look in MY PICTURES folder in case there is nothing left in there but dust! I was hitting every button in sight to try to stop that sync.

I'm pretty sure it could be better written, but I'm not going to turn down a warm fuzzy compliment; especially when it's all cold and rainy outside.

It seems like I have a teensy bit of a dilemma.

I printed out and underlined and read every word you sent.

First problem: I tried following both sets of instructions. Kind of like listening to the republicans and the democrats. I was somewhat confused.

When I got into Itunes I managed to turn off auto-sync.

I plugged in the iPad.

Then the "problem" raised its ugly head. There was no photos tab at the top of the page! I couldn't turn off photo syncing!

I tried the sync start up button and I could see it was trying to load the zillion photos again. I hit the x.

In my next life I am going to come back as a computer tech. Sigh.

No need to give up yet. Here is a quick guide to the deleting the photos part. Give it another try, and let me know what (if anything) is not appearing/happening. 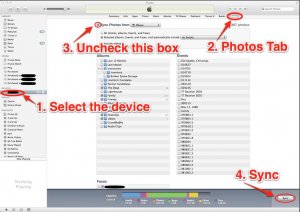 The Sync button may say Apply instead.
L

I have an app I downloaded called Transfer. I plug my iPad into my PC and transfer pictures from my computer to my iPad.
I do not need to go to iTunes at all. The "Transfer" program walks me through the transfers. I can do it either way. From my
PC to my iPad or from my iPad to my PC. It's very simple. If your pictures are on iTunes then you could first send them to your
Computer, then to your iPad.
iPad 1 64 gb. IPad3 64 GB both wifi

Eureka!!!!! I did it!!! You have NO idea how convoluted that was. OMG! I'm exhausted! Nothing seemed to be where it was supposed to be. There was no sign of PHOTOS anywhere on my itunes screen ... that took forever. There was no sign of DEVICES in the left column. That threw me for a loop. Then, all of a sudden it appeared and ... there it was ... all the stuff on your excellent diagram ... and bim, bam boom DONE! I was suddenly on a roll.

I probably only listen to my Ipod a few times a year. I have all sorts of great music on it ... I just don't listen to it much ... so I forget how Itunes works. Messing with Itunes is ... not my thing. Now I have 335 songs on my iPad.

So, from what I was seeing ... all those hundreds of pictures that were attempting to infest my iPad have disappeared into the ozone somewhere. I can see by the column on the bottom that they are not taking any space on the iPad ... so they must have been deleted. I have still not made that folder you told me to set up. I am assuming I have to set that up in itunes ... when I've had some sleep.

Sade is singing. My battery is just about dead. I have to go ... thanks heaps!
You must log in or register to reply here.