Pick Up Babes: The iPad Is The New Puppy

The iPad Is The New Puppy 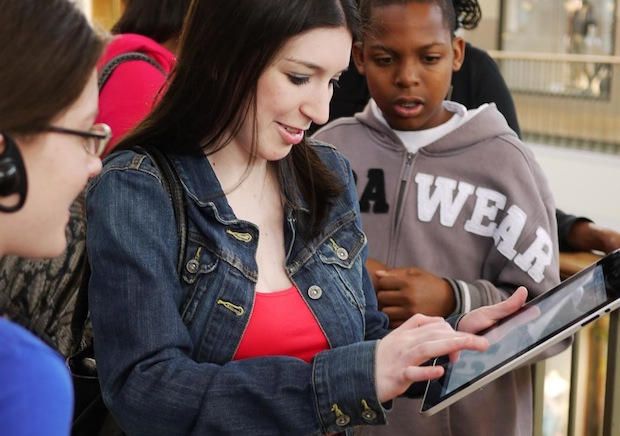 The iPad is a total babe magnet, writer Jim Colgan has discovered.
Colgan took his new iPad on the streets of New York and got so much attention, he says itâ€™s better than borrowing a puppy to talk to girls.
â€œIf youâ€™re looking for a dating aid, leave your friendâ€™s dog alone and borrow an iPad,â€ he says.
Taking the iPad to a bar, â€œtwo women emerged from behind him and screamed and pointed. They all wanted a go.â€
Of course, they wanted to check out the iPad, not him. But an openingâ€™s an opening, right?
More here (Blog) and here (Radio segment).
Iâ€™ve had similar experiences here in San Francisco. So many people want to check the iPad out, itâ€™s impossible to use it in public. I was too embarrassed to take out my iPad at Ritual Coffee Roasters the other day, even though I had work to do. I used my iPhone instead.


Anyone else got a story?

Confused, what part of that story was yours and what part was Jims?
Youre in Georgia, Jims in New York, whos in San Francisco?? Lol

And second, who cares about girls (or guys)?? We got the iPad! The relationship killer of the 21st century! Ha ha ha free at last!!

Word... I had similar stuff happen in a local coffee shop here.

At first I was almost embarrassed myself to take it into the coffee shop, being that I am already used to using my iPhone in public every where and its normal to see any one using one these days. The iPad on the other hand is still so new, for some people just downright hate Apple and any thing they stand for or their products with no merit behind it. Secondly the iPad when not in a hostile territory will embark its user on a three hour tour of "Hey isn't that something" "can I have a go at it"? is it easy"? and its useless getting anything done or with any concentration.

This particular coffee shop has many regulars that sit in the window seats with their MacBook Pro's and MacBooks, it's like an Apple display at times when walking by outside.
When I would picture myself sitting in that very window box, All I could think was that once you gazed upon the device I was using where the backlit Apple logo sat, would be nothing more than the shiny gloss of a dark Apple. Obviously not a metaphor for what the iPad is not capable, more so just ironic which that one little touch is missing from it.

I was in a hospital over the entire weekend with my WiFi iPad and although the appstore among other things were blocked by their IT staff, it was still a good side companion to read books and browse the web while awaiting my sons discharge. Meanwhile the entire stay there, only one nurse out of many made a comment and it wasn't one of interest, just merely a minute little "Oh working on important stuff I see". Like wth was that supposed to mean, lol.

I figured it was just a passing comment when no other was available since she wasn't probably aware of what it was since the room was dark at the time and the screen was the only thing showing. In the cafeteria though, there was plenty of opportunity for passer by to take notice and deliberate comments, however not one even while propping it up to watch a little ABC TV shows from the ABC app.

I have to also be in the mood to have strangers inquire and to actually be motivated enough to want to show off the iPad. But, once you get me started on it, you would have a hard time stopping me. Some people have actually stopped me mid show, as others have labored on endlessly about how they need one and almost seem to want to walk out the door with it if not careful.

When I am on service calls and pull up paperwork on the iPad, I also get lots of googles and oohs and ahhs, is that the big iPod Touch... "Yea its the iPad and its really magical".

Once I get the 3G version I will be even more mobile with it and probably get to the point where I will have a prepared speech in its use as a mobile Internet device and how everything flows, if some one asks, by then the newness may wear off.

Yep, happens all the time. I let at least 2-3 chicks handle my iPad every time i go out.
You must log in or register to reply here.

Mar 13, 2011
zorah
Z
M
The Entertainment Dollar and the iPad

I
Save and Protect your iPad Device: How to Save and Prolong the battery life of iPad