I recently bought an ipad3 after owning an older iphone for around 4 years. The issue and question I have is the sync strategy within Itunes. The ipad is 32G and phone 8G and their intended use is not the same IMO. Phone I have different apps more music, less video, and Ipad more video and prob. the same music. So, when I go to sync, I see no options for calling up a different profile to sync each with. That sets off a tedious task of checking and unchecking each time I change devises. There has to be a better way to handle both of these that I'm missing. Please help and share your strategy. TIA!
M

It seems to me that Apple designed it so you have to same everything on all devices. I have also struggled to keep different stuff in each mainly because the 4s and ipad2 are different memory sizes in my case.
Last edited: Jun 9, 2012

No. Apple supports individual syncing of devices. Up to 10 on a computer with iTunes installed.

The only problem I have is that occasionally a recently (since last sync) app for one device will show up on the other after a sync. The fix is easy. Delete the unwanted app off that device. It goes away, and will not sync back the next time.

There are also Store settings on iOS 5 devices and iTunes that will automatically copy newly purchased apps, music, and books to all other devices. Go to those settings/preferences and turn them off if you don't want that to happen.
OP

How about when you are syncing checked songs and video? I believe they do not update or change the checked selections at device change. That is my main problem.

I have seven devices syncing to the same library and have no problem keeping the sync settings different for each device.

Verndog said:
How about when you are syncing checked songs and video? I believe they do not update or change the checked selections at device change. That is my main problem.
Click to expand...

Even better is creating Smart Playlists. Using those you can filter by rating, so that only the songs you like best will get on the lower capacity device.

Slight thread hijack: can I add one album from another Mac without disrupting anything? I have a few CDs that my iMac's optical drive won't read, but my wife's will.

Are both imacs on the same network? If so I would copy them from cd on the your wifes, then transfer them via the network (or usb stick) to the mac you want them on.

Thanks, that's essentially what I did. I imported them into her iTunes, then poked into her iTunes library from my Mac and sucked the album folders onto my desktop, then imported into my iTunes. Her 2006-vintage optical drive works better than my two year old one!

It's been a long time, and I'm not sure what settings are needed, but you used to be able to use the CD drive on one Mac (over the network) on another. It probably involves some combination of Sharing permissions. If you can manage that, you could use the CD directly (if not supper fast).

It might be worth your while to search on the Apple Support site, or Google it.
OP

Well, I appreciate the advise...but it was simple to add or remove songs or video with iTunes using the checked option. Most off all it was fast. I do not want to spend countless hours rating 6000+ videos and songs or mess with playlists. I may just end up installing iTunes for the cell on my laptop and use that to sync since there is no profile manager to make this simple and fast. Sorry, but much as I like the iPhone and iPad, when it comes to the iTunes interface it falls way short and really complicates what could be a painless interface.

Verndog said:
Well, I appreciate the advise...but it was simple to add or remove songs or video with iTunes using the checked option. Most off all it was fast. I do not want to spend countless hours rating 6000+ videos and songs or mess with playlists. I may just end up installing iTunes for the cell on my laptop and use that to sync since there is no profile manager to make this simple and fast. Sorry, but much as I like the iPhone and iPad, when it comes to the iTunes interface it falls way short and really complicates what could be a painless interface.
Click to expand...

It sounds like something is lost in translation here. It may pay for a step-by-step tutorial to be presented here, because it should not be as complicated as you're making out. i will see if I can find something appropriate for your situation.
Last edited: Jun 10, 2012

I agree you are making it out to be a lot more complicated than it actually is.

You want to have different syncing for each device, so you have to change how you were previously syncing based on one device.

You do not have to create a smart playlist based on ratings, there's lots of options. You don't necessarily have to create a smart one. Just create two normal playlists (ipad music and iphone music) and just drag from your main library which songs you want in which, this is just as easy as going thru your library and ticking and unticking selections. You then just set up the sync settings for each device to only sync to the relevant playlist.

Perhaps I'm not fully understanding the OPs problem, but I agree that they seem to be making it unnecessarily complex. I have my iPhone and iPad synced to the same iTunes library. They show up under the 'devices' on the left-hand side of the iTunes window, and each one can be set up with different apps, music, movies etc.. as per the settings under each tab at the top of the screen.

This is my iPhone:- 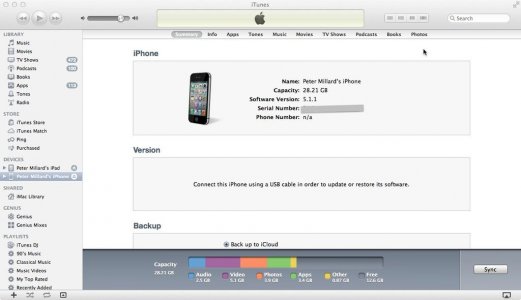 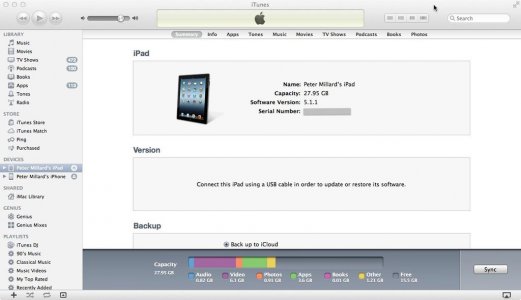 For example, I don't keep much music on my iPad so I have it set to sync just a basic playlist. On my iPhone, I have a different basic playlist, plus random favourite albums, plus whatever's 'recently added'. Same iTunes library on the same laptop, totally different content on each device, all managed through the tabs in iTunes. Simples

After a bit of thought, I've come up with a way for you to migrate to playlists with far less effort than setting up and maintaining two libraries/computers will take.

Now go to the Files Menu and create a Smart Play list. Set it up as Checked is true.

With the Checked playlist selected, go to the Edit menu and choose Select All.


At this point you now have two playlists that contain all your checked songs.


In the playlist for the device that you want to have fewer songs, remove the songs you don't want.

Alternately you could go to the the Checked playlist and start unchecking songs, then drag the results into the lesser-sized playlist (rather than the entire list and then deleting.


Now you have two playlists, one for each device, and you've done about the minimum amount of work possible to make them different. All that is left is plugging each device into iTunes, going to the Music sync tab and changing the settings to sync the right playlist for that device.

From that point on maintaining the playlists is simply a matter of removing and adding content. If you use the sorting and selection tools you can probably do this faster than checking/unchecking every single song.
You must log in or register to reply here.

A
Syncing music to ipad & iphone from a PC

C
Syncing an iPod and an iPad with a single iTunes account...