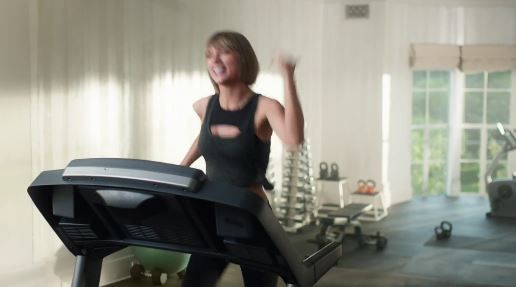 A new Apple Music ad featuring Taylor Swift, Future, and Drake proved to be so popular when it was released today that #TAYLORvsTREADMILL has been trending worldwide on Twitter for quite some time.

Having initially refused to let her music appear on Apple Music and also advocating for Apple to pay compensation to artists during the free trial period and getting Apple to agree to pay artists accordingly, Taylor Swift is now clearly very happy to appear in a fun video for Apple Music, with the minute-long ad showing Taylor planning her cardio workout music with Apple Music’s activity playlist, and choosing Drake and Future’s track Jumpman from the #GymFlow playlist (which actually does exist), with her iPhone and accessories of choice, namely a rose gold iPhone 6s and blue Powerbeats2 Wireless Beats.

The video ends on a humorous note, as you might expect, when Taylor gets a little too carried away rapping along with the music, hence the apt description that Apple Music is “distractingly good.” The video finishes with a reminder from Apple about the three-month Apple Music free trial.