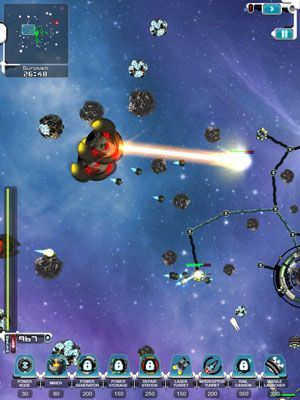 Origin8 has announced details today of the iPad version of Space Station: Frontier, a real time strategy/tower defence hybrid. The game has already been a big hit on the iPhone, and this new HD version has been optimised for the iPadâ€™s display. New features that have been added to the game include detailed HD graphics that still look great even at maximum zoom, smooth rotation when you instantly flip from landscape to portrait mode, and a new minimap that aids navigation around the field of play, as well as providing an overview of structures, resources and enemies.

In the game, you play the part of the Overseer of a deep-space mining operation, scouring the solar system for valuable resources. And as if that doesnâ€™t keep you busy enough, you also have to contend with a vicious, mysterious alien race who are trying to grab your hard-earned territory, which is where the tower defence aspect of the game comes into play.
Space Station: Frontier HD is available from the iTunes iPad app store for $4.99.
You must log in or register to reply here.