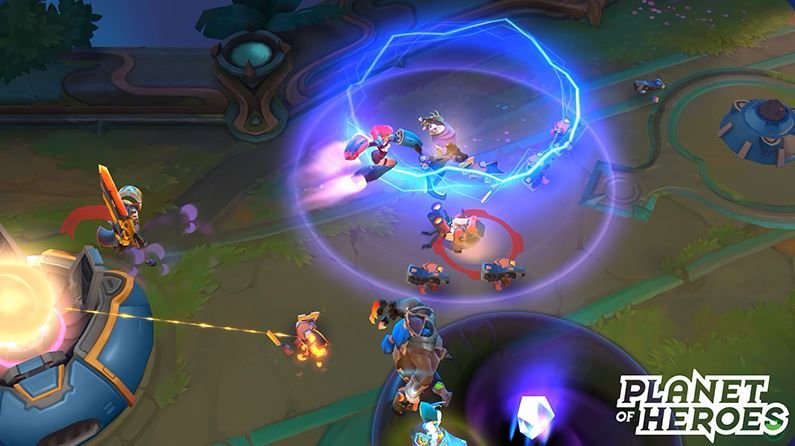 Planet of Heroes is a new mobile-focused MOBA currently in development at Fast Forward Studio, which is a newly formed internal game development team from international multimedia company My.com.

Planet of Heroes is being built from the ground up specifically for mobile devices, with the aim of capturing everything that is so awesome about MOBAs on PC, but at the same time capitalising on the strength of the mobile gaming platform.

A closed beta will be starting this summer, with the game scheduled for release at the end of 2016.

The Planet of Heroes storyline focuses around the Devourer, a galactic entity of great power that is sleeping deep in the bowels of the Ritual Planet, imprisoned by the Forerunners. Should the Devourer awaken from its slumber, disaster for the galaxy looms. Unfortunately it is already stirring, and close to being roused. In order to keep it sleeping, it must be fed with primal emotions—rage, bloodlust, and the thrill of victory. An arena is built on Ritual Planet to keep the Devourer fed, and an Order of Heroes is created from soldiers, rebels, poets, criminals, and scientists, and tasked with battling eternally to keep the Devourer from waking.

As you might imagine, creating a MOBA for the mobile platform from the ground up is a Herculean task, hence Fast Forward has assembled a dream team advisory “council” comprising streamers, gamers, and eSports personalities who will be consulted on game design issues. These include Cowsep, a MOBA expert and well-know Twitch personality, who has already had a big input in the development of the game.

“This is one of the most fascinating projects of my life: The good people of Fast Forward are 100% dedicated to making a game that hardcore MOBA fans will enjoy - I really love working with them!” he says.

Ivan Fedyanin, director of Fast Forward Studio, adds, “We all share a deep love of MOBAs, their competitive spirit and, above all, the vibrant communities around this genre and we are going to be sure we don't disappoint them.”
Click to expand...

Sounds very interesting indeed! MOBA fans, click here to sign up to be a part of the closed beta: Planet of Heroes - Sign up for closed game test now!