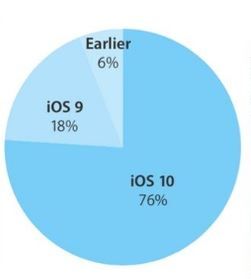 According to new figures posted by Apple on its App Store support page, via MacRumors, four months on from the public release of iOS 10 it is already installed on 76% of active iOS devices.

As you might expect, iOS installation rates have risen sharply over the holiday period, up 13% from 63% on November 27 2016.

The release of iOS 10.2 on December 12 has also helped the increase in adoption rates, as it included some popular new features such as a new TV app, new emoji, and an update to Live Photos, as well as the obligatory bug fixes.

By the same point last year, iOS 9 was installed on 75% of active iOS devices, so iOS 10 adoption rates have already beaten that figure.

It’s widely thought that Apple will be releasing the first beta for the forthcoming iOS 10.3 on January 10, although Apple has yet to make an official announcement on the matter.

Whenever I see an article talking about what percentage of people have upgraded to the latest operating system, I am puzzled. Except when someone has a computer that won't take the latest upgrade, it seems to me, the stat only shows who haven't noticed that there's an upgrade available. Does it mean anything else?

The stats only show what percentage of active iOS devices have or have not updated to the latest iOS version. There's no way to tell if it's because their device can't be updated, they didn't know of the update, or they knew but didn't want to update for whatever reason. What's not included are devices that are no longer being used for various reasons.
You must log in or register to reply here.