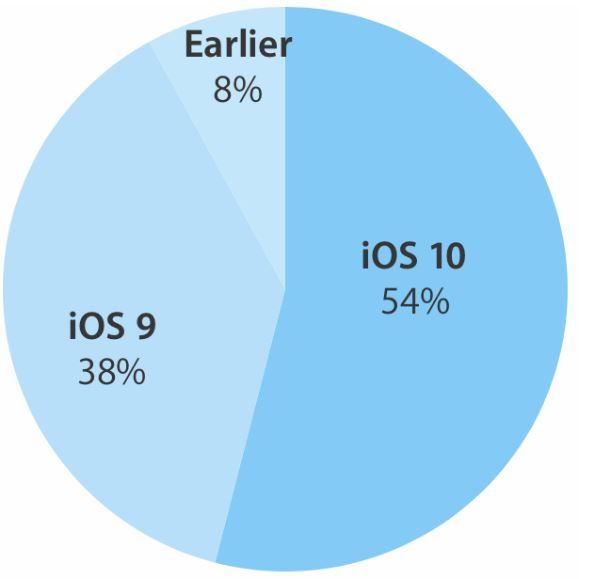 Yesterday Fiksu and Mixpanel both published their figures for the adoption rate of iOS 10, with both stating that their research, which was gleaned from iPhone and iPad web traffic, showed that iOS 10 adoption is around 66%.

Today, Apple has posted its own official iOS 10 adoption figures on its dashboard for developers, writes iDownload Blog, which, at 54% of all active iPhone, iPad, and iPod touch devices, is a little lower than Fiksu’s and Mixpanel’s figures.

Apple estimates that iOS 9 adoption has now dropped dramatically to 38% of users from 88% back in September, immediately before the iPhone 7 launch.

Earlier iOS updates are now in use by just 8% of active iPhone, iPod touch, and iPad devices.

Apple’s figures were obtained from logs that count unique iOS devices that accessed the App Store on October 7, 2016.

Interestingly, Apple’s figures show that the rate of iOS 10 adoption is actually a little behind iOS 9, which reached 57% adoption three weeks after it was released, and 61% adoption in just over a month.

Source: Apple pegs iOS 10 adoption rate at 54 percent
You must log in or register to reply here.

M
iOS 10 Has Faster Adoption Rate of Any iOS Update