If you have an Apple TV 3

..do not update it to OS 7.6. Mine now crashes every time I pause a YouTube video, requiring a hard reboot. Other sources still work OK, so I guess today's OS update broke the YouTube app.
Last edited: Sep 18, 2020

YouTube probably hasn’t updated their app. If this crash happens to everybody I’m surprised that YouTube didn’t fix the problem as they would have had access to the beta of tvOS 7.6 and should have seen that problem before release.
OP

I spent over 4 hours today on the phone with Apple and, on their direction, doing a full restore to factory settings. That meant resetting everything from scratch. Still no fix.

Remember, on a gen3 the apps are part of the OS, not separately updatable. IMO Apple should not have pushed me to update without basic testing of a popular app like YouTube. "Pause" may be the most-used feature of a streaming app. If Google needed to modify their app to comply with the new OS version, Apple should have delayed release until it was fixed.

It's hard not to imagine this is part of Apple's relentless drive to make everything over two years old obsolete, more features dropping off every year. It sure ain't Steve Jobs' Apple anymore.
OP

Update: after nearly two months, a new OS version 7.6.1 for Apple TV 3 just arrived. Sadly, the YouTube failure is not fixed. I hope nothing new is broken...

LannyC said:
Update: after nearly two months, a new OS version 7.6.1 for Apple TV 3 just arrived. Sadly, the YouTube failure is not fixed. I hope nothing new is broken...
Click to expand...

Hi Lanny - I'm surprised at the tvOS version on the Apple TV 3 (but likely related to its introduction date of 2012 shown below) - I've bought just one Apple TV, i.e. the 4th G HD model a few years ago and just updated the tvOS to 14.2 - seems to be fine although I've not used the YouTube app on the device - however, will give it a try. Dave 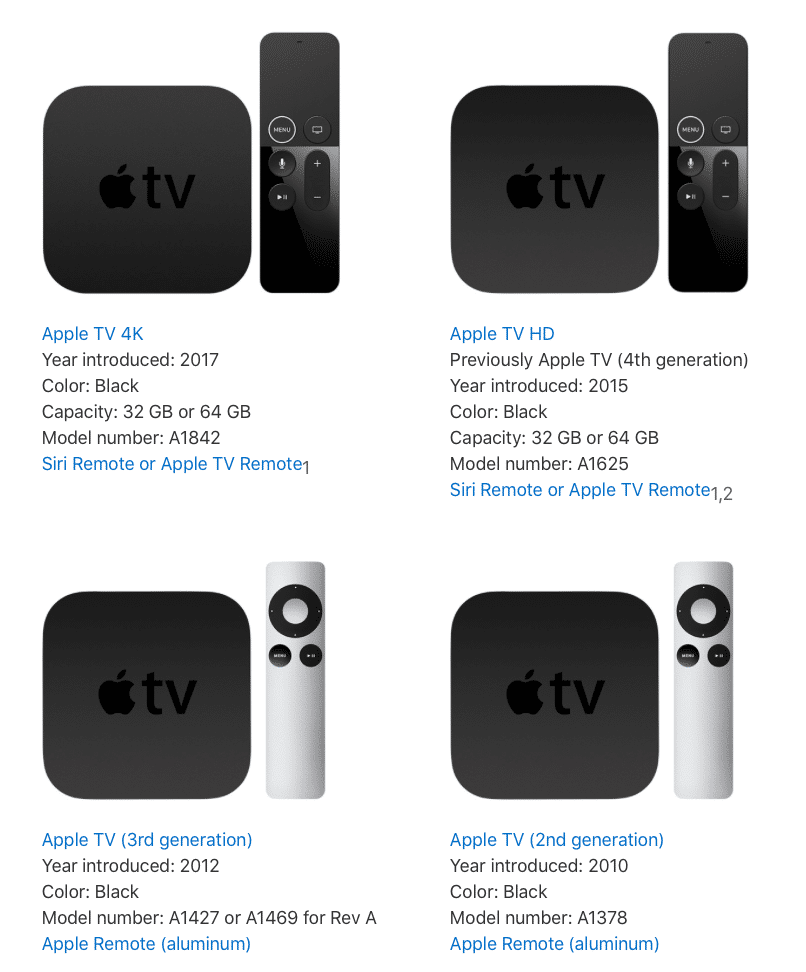 Dave, the 4th gen Apple TV is a completely different product, with its own OS. (Also, the price more than doubled.) The OS for the earlier models has all of its apps built in, and apps are not separately available or upgradable like yours. They are 100% under Apple's control.

That's why thousands of users are angry at Apple for nagging us to "update" without any apparent testing of one of the most popular apps. Imagine, at our age, watching a two-hour movie without being able to pause it.

Wow, I did not know YouTube had an app for iOS. Is is ad-free or something, what;s the point of using it? I just watch youtube videos straight in Safari.
OP

The iOS app may be a little more convenient than Safari, and possibly faster. Dunno, I never use Safari to watch YouTube. Free, but not ad-free.

But this thread isn't about iOS, it's about Apple TV 3, which lets me watch YT videos directly on my TV screen without going through a tablet or other computer.
OP

I got an email from Apple support today asking me to try the new Apple TV 3rd Generation update reputed to fix the YouTube bug. I did, and it seemingly does. This also means the handy pause menu works again.

I'm not sure which surprised me more, that the fix finally arrived after "only" three months, or that Apple bothered to let me know. Whatever.

I'm still not willing to trust my iPad to 14.X, when 13.7 does everything I want without issues.

LannyC said:
I got an email from Apple support today asking me to try the new Apple TV 3rd Generation update reputed to fix the YouTube bug. I did, and it seemingly does. This also means the handy pause menu works again.

I'm not sure which surprised me more, that the fix finally arrived after "only" three months, or that Apple bothered to let me know. Whatever.

I'm still not willing to trust my iPad to 14.X, when 13.7 does everything I want without issues.
Click to expand...

News: The update did fix the YouTube bug, though the ATV3 now reboots itself for no reason, in the middle of whatever I'm watching, several times a day for no reason.

Then today, a screen appeared letting me know that in March the YouTube app will no longer work at all. Seems the greedy bastards at today's Apple will try anything to force customers to buy new hardware, to the point of disabling existing devices for no reason.

Stick it where the sun don't shine, Apple. I just ordered a $25 Roku.

The YouTube app no longer working on your old AppleTV is the result of YouTube pulling support for the device, not Apple forcing you to upgrade. The 3rd generation was introduced 9 years ago and no device is supported forever.

I have an Apple TV3 and I very rarely watch YouTube on it, as I also have an Amazon FireStick 4K which seems to do a far better job of it anyway!
OP

Update: I got the Roku. It works, but it's clunky to use and took an hour to set up, due to the Roku iPad app's keyboard refusing to actually send a password to the unit. Also, the interface wastes space on pushing paid content that could be used to better purpose.

But the worst thing is the total lack of audio-out jacks, so it can't be cabled to my hifi's preamp or standalone DAC. (I'm using optical cable from my ATV3 to the DAC.) The only output is HDMI, presumably because only an idiot would not be using a home theater receiver. Guess what? I'm apparently an idiot, as I don't have or need one. I could run RCA cables from the TV to the preamp, but that means using the TV's DAC and lots of additional TV circuitry, which doesn't sound as good. I also use the ATV3 to stream uncompressed music from iTunes on my Mac, and so would need the TV on to listen to music.

So...I looked the current Apple TV. It, too, has only HDMI output. Apple decides what we can do, and we can like it or lump it. Feh. Tbe $149 ATVHD has no apparent advantage over the $24 Roku. And its remote is awful.

So, I suppose I'll use the Roku for YouTube, without the ability to run the audio through real speakers, and continue to use the ATV3 for everything else. Our world of choices is going steadily downhill...

Hi Lanny - well, I don't have the same setup as you but can sympathize w/ your woes over 'cable hell' - for the holidays (and in COVID isolation!), we treated ourselves to a new 4K Sony 49" HDTV and Sony 4K BD player (to replace our 9+ year old equipment) - I also regret the way these companies manipulate their customers by taking away 'inputs & outputs' that might work fine for older devices but they decide what is best for them, I guess (like Apple going from macOS 10 > 11 and switching to Apple silicon - still trying to adjust and plan for those changes).

But w/ the new TV & BD player, I'm OK - have my cable/DVR box, BD player, Roku, & Apple TV all attached to the new TV via HDMI cables; the TV has an optical digital output that I run to my Cambridge XR100 stereo receiver (just 2-channel sound) which carries the sound from the TV for all devices attached. As to the Roku & Apple TV remotes, a major work in progress!

Just finished watching the Blue Planet II in 4K - spectacular - although the TV is not large (not much choice in my den) the viewing was almost like being at one of the smaller IMAX theaters. Well, I hope that your find some solutions to your issues in the previous post. Dave
You must log in or register to reply here.