Hearthstone: Heroes of Warcraft Gets 134 New Cards in Latest Expansion 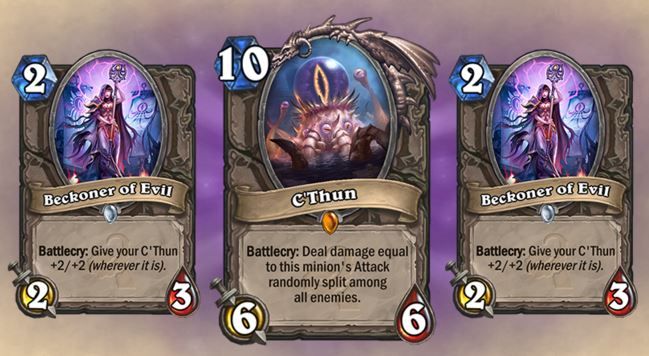 The third expansion for Blizzard Entertainment’s award-winning online strategy card game Hearthstone: Heroes of Warcraft is now live. From today, players have the chance to collect and battle 134 new cards, including the legendary Old Gods, C’Thun, N’Zoth, Yogg-Saron, and Y’Shaarj.

This latest expansion, entitled Whispers of the Old Gods, will turn the familiar world of Hearthstone on its head, as former allies have been corrupted, new monstrosities have entered the fray, and the Old Gods of Azeroth have reappeared to spread their sinister power throughout the tavern.

“Whispers of the Old Gods adds an exciting new set of creepy, corrupted cards to Hearthstone,” said Mike Morhaime, CEO and cofounder of Blizzard Entertainment. “We can’t wait to see how creative players are with the ancient evil of the Old Gods in their hands.”

Players also now have the chance to win Whispers of the Old Gods card packs as quest rewards or prizes in the Arena, and can also craft cards from the expansion with Arcane Dust, collected from disenchanting unwanted cards.