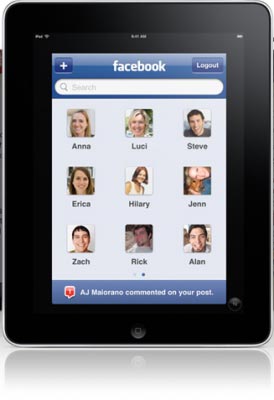 Joe Hewitt, the brains behind the Facebook App which has become one of the most popular apps for the iPhone says the iPad is â€œEverything Heâ€™s Been Wishing Forâ€ according to TheiPhoneBlog.com

iPad is exactly the product Iâ€™ve been wishing for ever since I wrapped my mind around the iPhone and its constraints. While the rumor mill was churning with all kinds of crazy possibilities for the Apple tablet, I mostly rolled my eyes, because I felt strongly that all Apple needed to do to revolutionize computing was simply to make an iPhone with a large screen. Anyone who feels underwhelmed by that doesnâ€™t understand how much of the iPhone OSâ€™s potential is still untapped.

Hewitt claims the biggest constraint he had in making the ultimate Facebook app was screen size, and the iPad removes that completely. As to the â€œclosedâ€ nature of the iPhone as a platform?

The one thing that makes an iPhone/iPad app â€œclosedâ€ is that it lives in a sandbox, which means it canâ€™t just read and write willy-nilly to the file system, access hardware, or interfere with other apps. In my mind, this is one of the best features of the OS. It makes native apps more like web apps, which are similarly sandboxed, and therefore much more secure. On Macs and PCs, you have to re-install the OS every couple years or so just to undo the damage done by apps, but iPhone OS is completely immune to this.
Click to expand...

Will i be able to play the games that facebook offers?
G

Facebook games uses Flash and the IPad won't have so that, so I am thinking that you want be able to do that. I am not a big game player, on my IPhone the games are so small. The IPad should be larger and the games should be more fun.
G

GarynDallass said:
Facebook games uses Flash and the IPad won't have so that, so I am thinking that you want be able to do that. I am not a big game player, on my IPhone the games are so small. The IPad should be larger and the games should be more fun.
Click to expand...

Yeah, I wouldn't be surprised if we saw a Farmville application show up on the iPad
G

Guillaume said:
Yeah, I wouldn't be surprised if we saw a Farmville application show up on the iPad
Click to expand...

As much as I loathe Farmville and everyone that spammed my wall with it (until they finally let you block it! THANK YOU FB!!) I do recall an iPad tester leaking on release day (actually prior to release day) that he was playing Farmville on the iPad.....so as long as that is true (and I think it is) you will get all your farm wasting time on the iPad soon.

Oh, don't worry about that- I do not dare touch Farmville either But there's no doubt it'd be a huge success on the iPad.
You must log in or register to reply here.