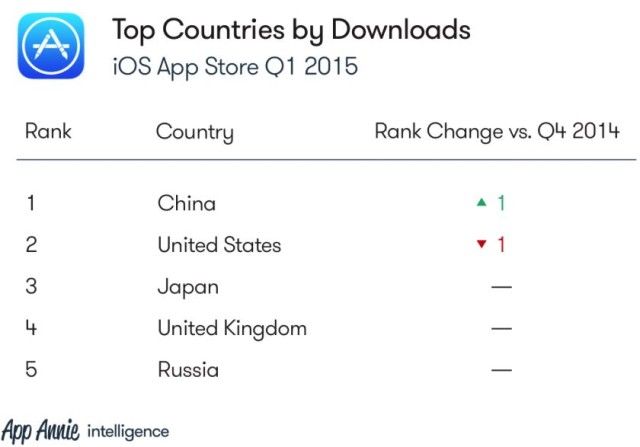 China is already Apple's second-largest iPhone market, and now a fresh report coming from analytics firm AppAnnie shows just how important this market has become for Tim Cook and his team.

The app analytics company reports that when it comes to iOS app downloads, China is now leading the way in the first quarter of 2015. China's ascendance is said to be linked to the popularity of the new iPhone 6 and iPhone 6 Plus models. Thanks to these new devices, Apple managed to obtain record sales of $74.6 billion in its fiscal 2015 first quarter.

While China also had strong growth in iOS revenue during the first three months of 2015, the country ranked third behind the U.S. and Japan in terms of revenue generated by apps. AppAnnie also informs that Apple's App Store worldwide revenue in the first three months of 2015 was around 70% higher than revenue on Google Play, which represents an increase of about 60%.

Xaiomi and there Miui operating system will out pace apple in the coming years.


Sent from my iPad using Tapatalk

Charlie Fox said:
Xaiomi and there Miui operating system will out pace apple in the coming years.


Sent from my iPad using Tapatalk
Click to expand...

They probably already do, not that it matters much to Apple. Xaiomi and Miui are aiming at the low end commodity market. They have to sell more to make anything. Apple likes to stay in the high end where the margins are better. The older Android manufactures, on the other hand, are really feeling the pain on this one. Having to fight with Apple on the high end is hard enough. Having their low end threatened as well is potentially catastrophic.

Not that this article has anything to do with that. This is purely an Apples to Apples comparison. How well is Apple's App Store doing in China compared to how well Apple's App Store is doing in other countries. The point, if any, is about how important China is becoming to Apple. Or, I should say, emphasizing that point. We already knew China was Apple's fastest growing market, and will likely be so for a good time to come.

No, they won't ever be the largest (by volume) mobile platform. But they don't need to be. Just a profitable one. And while not guaranteed (nothing is) they've certainly shown themselves to be good at making money in China so far.
C

We have had xaiomi ph for a year or more and now our friends have them as well and they are flawless, but the software is nearly identical to Apple though it's an android hybrid, not important to this forum I know, just telling of my experience, still love my iPad.

Apple Breaks Record of The Most Profitable Quarter of Any Company Ever: $18.04B in Profit