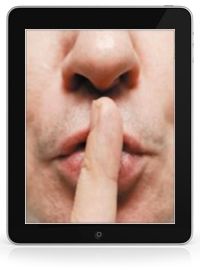 What does it take for a developer to get their hands on a pre-release version of the iPad? Well, according to a new report from BusinessWeek.com, quite a bit!

Would-be testers of the tablet-style computer, due to be released Apr. 3, must promise to keep it isolated in a room with blacked-out windows, according to four people familiar with the more than 10-page pact that bars partners from disclosing information about the iPad.

To ensure that it can't be removed, the iPad must also remain tethered to a fixed object, said the people, who asked not to be named because their plans for the iPad have not been made public. Apple (AAPL) won't send out an iPad until potential partners send photographic evidence that they've complied.
Click to expand...

It's sounds easier to just hit the bars in Cupertino around closing time
You must log in or register to reply here.

Of course the government needs to police corp America

Apple applies for iWatch patent in Japan, could have iPad abilities