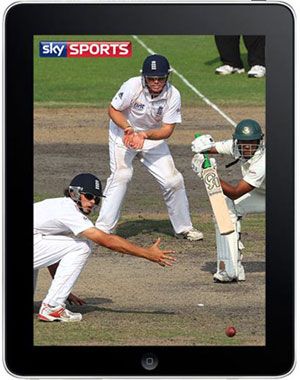 Sky TV in the UK has announced its new Sky Mobile TV app for iPad via its Tech Talk blog. This is basically an enhanced version of the app that was already available for the iPhone/iPod touch. According to Sky, Sky Mobile TV is the UKâ€™s most popular mobile TV service, providing access â€œon-the-moveâ€ to all Sky Sports channels and Sky News.

The new iPad app, which is available to download now either from the App Store on iPad or from the iTunes App Store, has been created to take advantage of the iPadâ€™s superior screen size. Although the app is free to download, youâ€™ll have to pay a whopping Â£35 per month to subscribe if youâ€™re not already a Sky customer. Existing Sky TV customers will â€œonlyâ€ have to pay Â£6 per month rather than the full Â£35. Currently Sky is offering existing Sky TV and Sky Player TV customers who subscribe to the Sky Sports Pack three months free access to the new iPad app. Other customers who donâ€™t have the Sky Sports Pack will get a monthâ€™s free access.

Right on time for the World Cup but way too expensive!

Anyone have a way to listen to all the matches?
I'm a huge soccer fan...
T

well guys as a brand new, super excited UK owner of an ipad, and by the way a full sky TV subscriber, this is truly an horrendous price.

Now I dont know how you guys in the USA have it, but here sky has basically monopolized TV here in the UK, I have everything from them, my full TV package, my phone, my broadband, and pay around an average Â£70 a month, which aint that bad considering.

Now the normal standard sky player available on both PC and now recently the xbox 360, again is great, and free to me as I'm a subscriber.

This story though, I have no doubt whatsoever it will be fantastic quality, but seriously Â£35 pm, no one on gods earth are folks paying this, I wouldnt even pay the reduced Â£6 , because quite frankly I feel I'm paying enough for it to be free in my opinion.

On a side note guys, sky don't actually own the rights to the world cup here in the UK, there was a law passed some years back, called the "golden 6" i think it was, were the top 6 or so sporting events could never be sold to 3rd party TV companies, which as far as I can remember is ..."world cup, Wimbledon tennis, the Derby, Olympics, and a few others.

There is talk that soon the ashes cricket test match will soon be added to that list.

Anyway guys, I may jump on board the free 3 months, as it will be superb.
But come on SKY, lower the ridiculous price.this kind of pricing is also stupid, given the multiple media availabe everywhere now.

I happily pay an extra Â£6 per month to get Sky Sports on my iPhone, but there's no way I'd pay the Â£35 Sky were originally asking for this - crazy, as it's the same app and content as the iPhone but six times the price! For comparison, Sky offer home subscription packages from Â£18 per month...

I'm also a full scope Sky subscriber, so I may pay Â£6 per month extra for it but drop it from my iPhone - but yes, the three month free trial sounds good

In Canada we get Sky Sports news on Setanta.
You must log in or register to reply here.