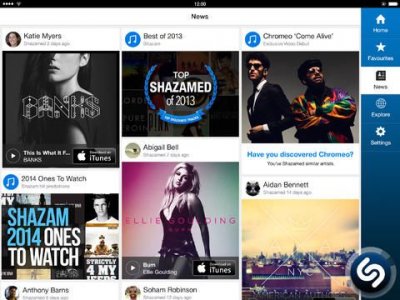 Shazam is one of the coolest mobile apps that you can get for your iOS devices, as it helps you identify song names just by â€œlisteningâ€ to some parts from it. Now, the official â€œShazam Encoreâ€ and free Shazam applications for iPhone and iPad users has received some new features which make it even better. The Shazam Encore app is free of advertising and can be bought for $6.99.

Shazam is the best way to identify music and TV. In seconds youâ€™ll know the name of any song, or more about what youâ€™re watching â€“ touch to Shazam to start your journey. Turn on Auto Shazam and weâ€™ll keep finding music and TV even when you leave the app. Check out trending sounds from all around the world, and get new content daily from your favourite Shazamed artists.
Click to expand...

Version 7.5.0 of the popular music-taggin application now comes with a whole new track page design. The app has been overhauled with a new look and feel for video, album & track reviews, artist bios and other options. Other improvements include the fact that now many song lyrics will scroll in time with the music and Rdio users can now add a Shazam track to any of your playlists.

Auto Shazam is now more efficient so it consumes less of your battery life. After a long waiting period, the ability to connect to Facebook and see what your friends are Shazaming has been seriously improved with the new share screen. And if all this was not enough, itâ€™s now easier for you to control news feed notifications from within the app. So, waste no more time and grab the updated app from the iTunes Store.

Shazam for iOS Devices Gets Updated with Support for iOS 9

Siri Comes with Shazam-like Powers in iOS 8, Can Identify Songs Played on Any Device