Hi all my local McDonalds gives 3 hours free surfing,
great l don't lose my LTE.
Yesterday it worked fine on my iPhone 7 but not the iPad.
I compared the 2 for settings and could not see anything obvious.
I am missing something somewhere, anyone help out help here. For the next time I feel the need for burgers.
Thanks Team

Well, you might want to 'Reset' the iPad and try again - assume the device's Wi-Fi works elsewhere - below is the website HERE which has a short FAQ section that may be of help?

Just curious - is the 3 hrs for one visit or cumulative? Don't believe that I'd want to sit in a McDonald's for 3 hours - Dave
. 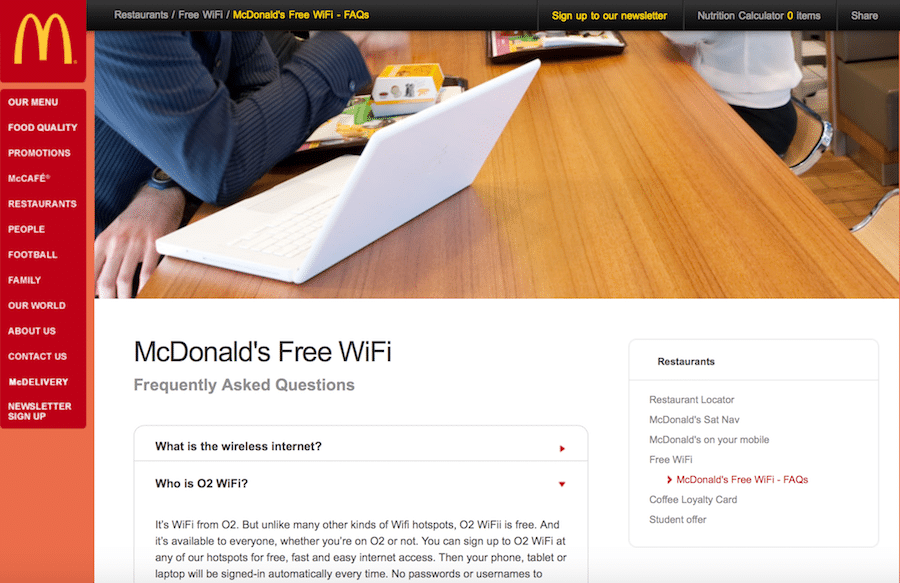 I don't sit there for 3 hours munching one burger.
Screaming tin-lids would drive me nuts. But it does work in the car park l found out once. Every time l visit it gives me another new 3 hours,so l guess it's not cumulative.
Thanks for the link will check it out.

brixtonboy said:
I don't sit there for 3 hours munching one burger.
Screaming tin-lids would drive me nuts. But it does work in the car park l found out once. Every time l visit it gives me another new 3 hours,so l guess it's not cumulative.
Thanks for the link will check it out.
Click to expand...

Well, I hope that you're not taking my comments seriously, especially w/ the emoticon used -

I go to a McDonald's about every 2 years when the wife and I are 'on the road' traveling - we prefer Wendy burgers in that situation - but let us know if you figure out the reason(s) - may help others. Dave

I personally would not know who would spend 3 hours in a McDonald's but a lot of fast food places do have some sort of free wifi.

I've seen people sitting in McDonnalds with laptops, doing work of some kind or other I suppose. This is usually during the quiter hours, in less crowded resturants, and probably not for 3 hours. Still, it's little differen't than those that sit for hours in Starbucks or other coffee shops and cafe's doing their work. And while those may be a bit more upscale socially, I doubt they are significantly heathier. Depending on your choice of food, of course. Coffee and a pastery may look nicer, but I doubt it's nutritionaly any better than coffee and a sausage roll.

I don't bother with wi-fi in my local McDonalds because the speed is terrible. Also, I prefer Subways, where I do spend an hour or two going through the news most mornings. I use my cell data there, because the wi-fi is not open, but I have cell data to burn, so no big deal.
OP

When l saw the icons it upset me so much, l drove there again. And sat outside crying my eyes out.

Don't do that again Bitte
Or l will get fat
OP

The only thing l picked up on from the link was hotspots.
Next time l visit will pay more attention
Thanks
OP

Sitting in McDonalds right now, surfing the net for 3 hours today free on my iPad Air 2. I switched of my wifi because l have LTE. And after that it logged me in. Telekom wanted to save my data for 30 days so they can log me in automatically on my next visit.
That is one box l did not tick.
OP

Boring went to Mac’s again didn’t use the net though just food . Funny the things people take for granted.
I did that, when l got home after shopping my near neighbour asked what l what up to, like you do. Should have offered to help with the bags lazy..........
Anyway told him were l’d been, he said he’d love a MacDonald Burger

But he can’t get there, only by bus and walking. I know this.

Next time he’s in for a super surprise his Frau likes them also, Happy Days
You must log in or register to reply here.

A useful day with iPADing on a Hospital day