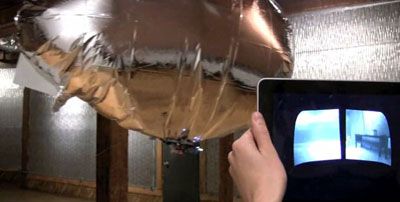 Another day, another example of inventive people doing crazy things with their iPads! Check out this video from Breakfast NY, who took it upon themselves to fly an iPad-controlled blimp (a modified BlimpDuino) over the heads of guests at a Design Week after-party recently. The party featured a silent auction of 23 KidRobot Munny characters created by top industrial designers, and to celebrate, BreakfastNY decided to fly a 52â€ blimp, complete with camera, over the heads of the assembled throng, controlled by an iPad, which also received the live video feed from the cockpit. When party goers looked up at the camera, their faces were transformed into the faces of the Munny characters that were going under the hammer. The blimpcam feed was also projected onto a big screen at the event and on the event website. Check out the video below which shows you exactly how they did it. If you fancy doing something similar yourself, the BlimpDuino is available as a commercial kit from the Maker Shed or the DIY Drones store for $89.99.

That is so cool Amazing stuff

next time there will be an eight year old kid onboard and an F16 scramble.

From viewing that video, . . .
I don't think "over the heads of the assembled throng",
means what they think it means.
.
A

haha....imagine being able to control an even bigger blimp! like the sky one?!
You must log in or register to reply here.