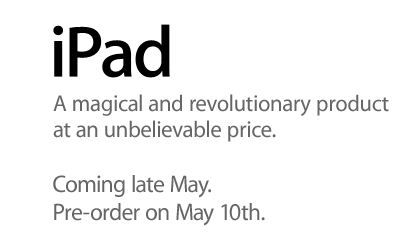 Apple has today announced via a press release that the iPad will go on sale on May 28th in nine more countries â€“ Australia, Canada, France, Germany, Italy, Japan, Spain, Switzerland and the UK. Customers can pre-order all iPad models from Appleâ€™s online store in all nine countries from Monday May 10th.

According to the press release, the iPad will start to roll out to even more countries in the summer, going on sale in Austria, Belgium, Hong Kong, Ireland, Luxembourg, Mexico, Netherlands, New Zealand and Singapore in July (date not yet known). Apple says that it will announce availability, local pricing and pre-order plans for these additional nine countries at a later date.

The Apple UK store has already been updated to reflect this morningâ€™s announcement, although would-be customers will have to wait until this coming Monday May 10th to actually pre-order their iPad, of course.

From www.engadget.com<!--BLOG POST CONTENT: title, byline, icons & body-->
Update: Tax-inclusive pricing is out. TrÃ¨s cher! Oh, and Orange UK has fessed up to pricing details for the iPad 3G + WiFi.

whipped this map up earlier

This thread is old what do you not believe ?

col.bris said:
This thread is old what do you not believe ?
Click to expand...

I believe this person is preparing to spam us. Lately there's been a rash of those with about the same MO. They post the required minimal number to be able to have permission to link their garbage.
You must log in or register to reply here.