Basicbob said:
I got a majority of these puzzles on my own, but I would like to thank everyone on this forum who provided nudges. After all the developers said use any reference you can find on the web to solve these puzzles. I did not like the fact that they said you are a genius or you cheated after solving #82......how the heck do you cheat.
Click to expand...

Did you email them after 82? The program at least on my iPad doesn't say anything about cheating.
H

hugemonkey7 said:
I have finally solved #81, the one with the CBNC for typing in "ASCII"!!
It is not showing up on the leaderboard yet.
I have been working on this one in my spare time for over a year.
The problem is the first character is not what it appears to be it is actually another character and If you PM me I will let you know what it should be.
Click to expand...

The character is a lowercase I acute. The problem is that the HTML standard says the value is 205 while the extended ASCII tables say its 161.

Hvsavage said:
Did you email them after 82? The program at least on my iPad doesn't say anything about cheating.
Click to expand...

It said it on my IPhone.

Basicbob said:
It said it on my IPhone.
Click to expand... 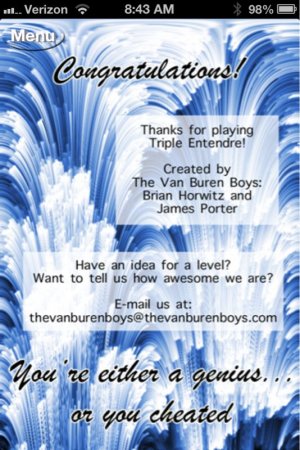 Dang! I did not notice that. I assume that no one has had any luck with the ACT turtles and NYC. That is the only one that I am still stuck on.

hugemonkey7 said:
Dang! I did not notice that. I assume that no one has had any luck with the ACT turtles and NYC. That is the only one that I am still stuck on.
Click to expand...

#77 is the only one that nobody has solved, including me. After I solved 82 on my iPhone this screen popped up.
H


Here's what mine said. 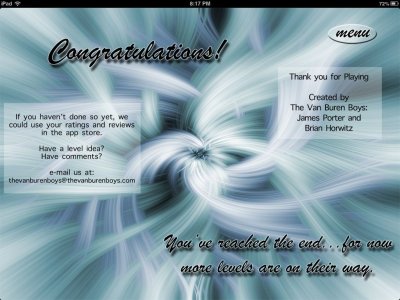 Hvsavage said:
Here's what mine said.

My iPad has this screen too. It was the iPhone version that sorta ticked me off.
H

Basicbob said:
My iPad has this screen too. It was the iPhone version that sorta ticked me off.
Click to expand...

I suspect that the message appears if you solved O82 and have a very low number of misses over all the puzzles. From his posts in the other forum, I know that he was upset when he put out a new update and all the new puzzles were solved in a very short period of time. I think he would consider it cheating if you jail broke your iPhone and got the answers from the program directly. He probably didn't consider the case of someone with two devices who does most of their guessing on one device.
B

Thanks to those who resurrected this thread, which I've stopped checking, but which does alert me to updates. After reading the last few messages I didn't get another CBNC but I was able to figure out the answer almost immediately. It felt good to be able to finally solve it with just these nudges and I'm glad I didn't have to go so far as to ask for another clue. I wasted another couple of hours on 77, but it was the same old stuff.

As far as that screen is concerned at the end of the game I got that long ago and think that it wasn't anything to be offended by, it was just an example of that VB Boy's sense of humor.
K

Foodlion said:
And, seriously, whoever first unscrambled "a fool maid sits" into an incomplete anagram to find the missing piece is a hero. And then tried numerous daughters with multiple spelling variants without any positive feedback. THAT question was unsolvable!
Click to expand...

Lol...thanks. Really just stumbled onto it. I love seeing the action on here again! And kudos to the one who solved 81...symbol. Whew! Now we gots to get 77.
F

I'm a little bit in denial - I typed in a word and it jumped to the next puzzle. There's no celebratory fireworks or anything, just the screen advancing. Did that just happen?

Anyway, the brief narrative. Every six months or so I would noodle on it. Got a new iPad, played through all the puzzles again since you can't copy over the save file. I skipped o77, then finished the game and circled back to the dreaded turtle shells. I started out by rehashing one of my old theories, one I'd dug into and found nothing. This time, same theory, one Google search, one entry, and the screen advanced. What?

And the kicker is, it was an idea I had a long time ago. I actually deciphered the shells correctly, way back when, and did the google search. With that info in hand, the answer is really, really easy. How did I not see it? Maybe it was my wording along with a lack of CBNC. Who knows, it was too long ago.

Rats. Sounds like I'm the only one left. Well, I'll celebrate with myself (*clink*).

Now that all answers are in, I'd also like to take a moment with this open mic and empty room to rank the worst puzzles. Not that this was a bad game - mostly a wealth of brain bending delight. But these...

Mild spoilers. But you want these spoilers.

1. A fool maid sits - o78
First of all, how is this an anagram? Scrambling an incomplete phrase made up of nonsense syllables? With an extra S thrown in, no less? It would be bad enough to scramble up only part of a word, then tell people to unscramble the part that is there and identify what is missing. Scrambling up 80% of solfege is... nonsense.

And you get "re" instead of "ra" even if you get that far. I don't know who figured that out.

After that, there are no less than 5 "daughters" I found on the internet, all from different sources, all with multiple spellings, and not a CBNC in sight.

Whoever solved that one... I raise my glass.

(As a side note, I had a heck of a time with the schoondoctor as well, trying to find the right combination of first, middle, maiden, and married names)

2. Canard / BQV - o79
This one's a little better since "Canard" is a reachable clue, and the puzzle is theoretically solvable with only that info.

But... what? Even with the answer in hand, no one has yet made a good explanation for what the BQV stands for. Bartlett Cove, suggesting small aircraft? Force in a magnetic field, suggesting physics? A relation of the Wrights named Bartlett?

Again, I raise my glass. Someone out there is a hero.

3. The turtle shells - o77
The main problem with this is that the turtle shells are a red herring. I learned a ton about the three shell scam on the sidewalks of New York City, about plastrons and red eared sliders... all for nothing. Now, if you search "turtle shell ocarina" you will find, in fact, ocarinas shaped like turtle shells. But starting from turtle shells, you'll never reach ocarinas.

Anyway, a red herring, no guidance, and a very specific piece of background knowledge. Which is why it took three years.

4. Mother Trucker - o69
This one's only a little better than the Canard and the turtle shells, because the man is more recognizable (more common domain knowledge) and, with the answer in hand, you CAN actually go back to discover what the red herring "Mother Trucker" was meant to suggest.

But, searching for Mother Trucker with anything other than the answer in hand will lead you nowhere. And unless you recognize the man, the fact that he is sitting in something that looks like a prison cell, rather than a stage, will prevent you from identifying him.

This is one of those things, if you recognize the man, the puzzle is super easy. If you don't, there isn't enough there. Just a tragic puzzle.

5. Birth of the Bahamas - o35
The Bahamas were born in 1973. Period. Nothing happened there in 1965 (at least, not according to the internet). Alternatively, nothing happened in Mozambique in 1983. This is a head scratcher, no doubt.

This puzzle gets ranked better than the others since you can still vary the numerator or denominator one at a time until you advance.

6. Hercules - o50
I'll say, even knowing what the dice represent, I have trouble seeing it. Maybe a different color scheme would make it easier. I don't know. I get it. It seems fair, but I never would have figured this out - even now I can't connect the dice and what they represent with any consistency.

7. Magnitude 8.5 - o80
This one gets a bit of a pass since you can look up magnitude 8.5 earthquakes until you find the right one. But if I step back and assess the puzzle...

I'll state this clearly - you cannot make an anagram of random letters and expect people to figure it out. This is two first initials and a last name. You could take any last name, throw in two random letters, scramble it up, and no one would ever know what you meant to say.

There is saving grace in this puzzle, though. First of all, seeing dice and "perfect score" suggests dice games, and if you dutifully search through the dice games you would eventually see a name that matched the letters - reverse engineering the anagram.

And then, there are only so many 8.5 earthquakes to choose from.

8. Apron from hell - o31
This was fine as a puzzle. But you have to research the subject in depth to figure out the story and the detail that will advance the game.

If anyone reads this, just type in Goulston St and move on.
===
That's my rogues' gallery. Everything else was difficult, but reasonable and doable. That leaves 90% of the game as genius, 10% as angst. For anyone out there reading this, hopefully this gets you past the immovable objects and onto the good stuff!

Thanks Van Buren boys, wherever you are.
Last edited: Jun 23, 2016
You must log in or register to reply here.