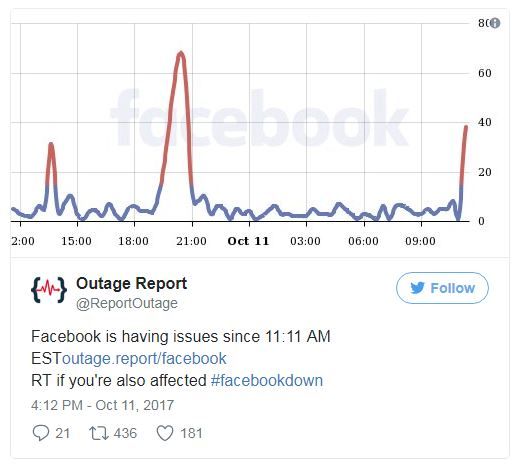 If you’re finding that you can’t connect to Facebook or Instagram, don’t worry, it’s not just you, as Mashable, along with many other news outlets, is reporting that both Facebook and Instagram, which is owned by Facebook, are down worldwide. When you try to connect, you’ll simply see a sad square face and a message saying “This page isn’t working.”

The first sign of problems appeared at around 11:11 a.m. EST today, and the issue appears to have spread to both desktop and mobile platforms. Services such as Down Detector and Outage Report are also showing mass outages, with Outage Report showing that the East and West coast in the US and also Europe have been particularly badly affected.

Facebook-linked services such as SocialFlow are also reporting lag and “delays or errors publishing to FB.”

The Instagram problems don’t appear to be as widespread as those on Facebook, but that situation could swiftly change.

Facebook has said that it is aware of the mass outage in a statement to Mashable, and that it’s “working to get things back to normal as quickly as possible.” It has also now posted an update on Facebook for Developers, stating that “we are currently experiencing an increased level of API errors. We are investigating the cause and we’ll post updates when we have more information.”

Lol, people are getting so nervous when there is a Facebook or Instagram outage. Especially those with more than 100k followers. They feel like they are losing their minds.

I totally agree with you
You must log in or register to reply here.