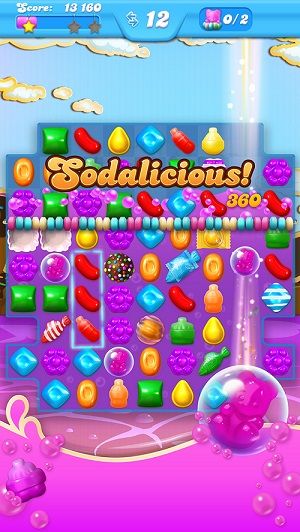 King Digital has been teasing this release for several weeks now with some really cute, “sodalicious” trailers, but now the genie is out of the bottle and the secret is unveiled, with the news that Candy Crush Soda Saga is out now for iOS.

Billed as the “sister title” to the massively popular Candy Crush Saga, Soda Saga sees the player returning to Candy Kingdom, only bigger and better than ever before, with new environments, a new range of yummy-looking candies, and lots of new characters to meet.

The game has a total of five new game modes in all, jam-packed with candy and pink soda. New character Kimmy joins old favourites Tiffi and Mr. Toffee as they battle their way through 135 new levels. Two new colour combinations also feature, with players having to match four candies in a square to win a Swedish Fish or seven candies to make Colouring Candy.

Here are details of the five new levels:

· Soda - Players are tasked to fill the board with fizzy purple soda
· Soda Bears - Gamers must release the floating bears in soda
· Frosting - Fight to crush the ice to free the bears
· Honey - Release the bears stuck in the honey
· Chocolate - Remove all the chocolate from the board
Click to expand...

“We’re excited to offer our players the chance to experience the next installment in the franchise now that Candy Crush Soda Sagais available on mobile devices,” said Sebastian Knutsson, Chief Creative Officer at King. “We continue to be astounded by the global success of Candy Crush and the initial response to Candy Crush Soda Saga, since it launched on Facebook last month, has been positive. With the mobile launch, fans will be able to play the game anywhere, anytime, and on any device and we hope they have as much fun playing it as much as we have had making it.”
Click to expand...

King Digital says that the new game has been designed to be played alongside its predecessor, with familiar gameplay, but lots of new features and challenges.

Source: King Digital Entertainment
You must log in or register to reply here.