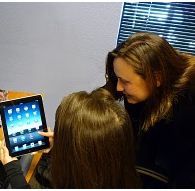 The Santa Cruz Sentinel website is reporting that the Monte Vista Christian School in Watsonville has replaced its history textbooks with 60 16GB iPads in the classroom, as part of a pilot scheme among advanced placement students. If the scheme proves successful, Headmaster Stephen Sharp plans on replacing heavy textbooks with cheaper, interactive e-textbooks, which are a third cheaper. Sharp tells the Sentinel that many schools will soon be following his lead, because of the many advantages that iPads offer. â€œThere are so many academic advantages. They provide new access to photos, videos, daily newspapers and resource material that enhance the curriculumâ€, he says.

The Sentinel reports how English teacher Marcus Schwager taught his students to look up the meaning and pronunciation of unfamiliar words in Shakespeareâ€™s The Tempest on the iPad with just a tap, and Science teacher Cynthia Armstrong showed her class an interactive display of a cutaway view of the female body, zooming in when necessary. All of the teachers involved in the pilot scheme expressed their excitement and enthusiasm for the many benefits that the iPad has to offer as a teaching tool. The students were just as impressed, as you might expect, with 15-year-old sophomore student Alyssa Villanueva saying that in comparison to a text book, the iPad is â€œa little easier to use. You can really focus on where youâ€™re studying.â€

Unfortunately the students canâ€™t take their iPads home with them, so they have to email their notes to a home account.

All it takes is one to start it off.

I'm sure some parents will start getting their kids their own personal units.

60 iPads? Hey, I thought there was a limit of two iPads per customer?

Isn't California rather hard up for funds?

The school was a Christian school not public. Even so there is a place for the ipad in all school systems.
I

iVan said:
60 iPads? Hey, I thought there was a limit of two iPads per customer?

so much for that theory lol
E

So interesting. I think iPad is useful tool to teach children. The children can know about high technology and the world.
A

yay!!! i don't see any schools introducing androids into their environment...

They sell in packs of 5 & 10 to educational institutions... We are currently rolling out 10 to start a pilot program with our special education and resource students.
D

If I had any idea how to go about it I'd be developing an app with interactive text books. An book that actually shows you how to do a certain equation instead of just explaining etc. Whoever or whatever company gets that done right, will make millions.
You must log in or register to reply here.

Schools in Singapore issuing iPads to teachers and students