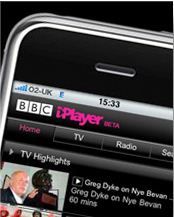 Tech Watch reports today that the BBC has found a work-around for its thorny iPad problem, and new iPad owners in the UK will now be able to view the player on their iPads. It was initially thought that users would not be able to access the iPlayer on their iPads, because of the iPlayerâ€™s dependence on Flash, which of course the iPad famously doesnâ€™t use. However, according to Tech Watch, Erik Huggers, Director of BBC Future Media and Technology, has said that an iPad version of the beta iPlayer site will be running this Friday, iPad launch day in the UK.
Tech Radar, who also cover the story, say that the iPad-friendly version of the BBC iPlayer works like the YouTube Widget as a web-only version without using Flash.

And just to tie the whole story up in a neat little bow, Evening Standard Science and Technology Editor Mark Prigg who first broke the story about the iPad iPlayer this week, has confirmed today on his Twitter that it is â€œup and running, and looking lovely.â€

Rats, only works in the UK. I was hoping it would work as a native English speaker living in central Europe.

NumbLock said:
Rats, only works in the UK. I was hoping it would work as a native English speaker living in central Europe.
Click to expand...

AND.... notice how a media provider can get around the flash "limitation" on idevices? Flash really is dying......

I'm glad to say the new iPlayer works well on the iPad here in the UK.

But the screen is a little sparse of written content and seems to be a 'one-size-fits-all' for various hand-held devices not just the iPad.
E

NumbLock said:
Rats, only works in the UK. I was hoping it would work as a native English speaker living in central Europe.
Click to expand...


I thought there were sites that offered IP-aliasing/hosting to get around this. I know some Europeans do this to watch American tv on their web sites...

Sorry but unless you've bought a UK TV License why do you think you're entitled to the BBCs content?
B

this is good update for me.
A

I'm loving the high quality iPlayer picture on the iPad, but there is a terrible lipsync issue - with voice is out by a few seconds from the image on everything.

Is this a known issue or are there any settings I can tweak on my iPad?

You may wish to check your latency. If you've got a very high ping time from the BBC site to your ISP then this may cause lip sync problems.
Maybe there is an App for doing a TRACEROUTE command?

I'd connect to your home wi-fi network and try again with your iPad and your desktop PC.
If they are both having lip sync problems then it's common to both systems.

If not, then why not email the BBC and ask?

Could be a bug.
A

I use iPlayer on the PC quite a bit and don't get any notable lipsync issues, so I suspect it's an iPad only problem - just wondered if anyone else was seeing it or whether there was something obvious I was missing.

The BBC wouldn't have released a version with lipsync problems, so I suspect it's perhaps because you don't live in the UK?

The extra high latency due to the distance from Moat House in London may be causing your problem.

If however you're in the UK, then get in touch with the Technical lads on the BBC web site. They welcome bug reports from License fee payers.

No, I'm very much in the UK and not that far from London. My broadband connection gives me about 2 meg so the stream plays fine, just out of sync.

I have posted to the BBC site now, see what that helps.

abovingdon said:
No, I'm very much in the UK and not that far from London. My broadband connection gives me about 2 meg so the stream plays fine, just out of sync.

I have posted to the BBC site now, see what that helps.

Try a TRACERT command on your PC.
(tracert beta.bbc.co.uk)
I live in Scotland and have a 50Mb/s connection to the Net

As you can see I get 12 respectable hops of less than 50ms response time from each router on its way to the BBC iplayer site. You no doubt get less hops?

Location
The Centre of The Universe, UK

Bumping this thread a bit...

I want to use the iPad and iPlayer in my living room by using an iPod composite (yellow video, L & R audio) through a SCART adapter. I am aware that YouTube and Video will play via the cable, but before I shell out Â£35, does anyone know if iPlayer will output to TV this way?

Oh, I'm on a 10meg Virgin connection and I suffer very minor lipsync delays. Not much, but it's there.
You must log in or register to reply here.

Get BBC iPlayer on Your iPad