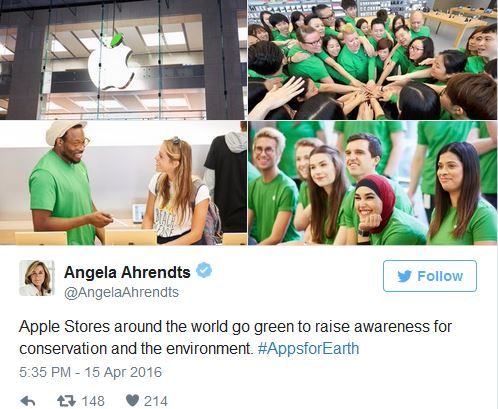 Apple always commemorates Earth Day each year, but this year it has started celebrating one week early, reports MacRumors. Today, Apple has changed the logos of more than 100 of its retail stores around the world by adding green leaf accents.

Apple fans around the world have been posting picture of the various stores and their decorated Apple logos in countries such as the United States, Australia, Belgium, China, France, Hong Kong, Italy, Japan, Spain, and the United Kingdom.

Starting the Earth Day celebrations one week early also ties in with Apple switching over from plastic bags to paper bags, with Apple telling its employees to make sure that all remaining plastic bags are used up before switching to the paper ones.

Source: Apple Stores Celebrate Earth Day With Green Logos and Staff T-Shirts
You must log in or register to reply here.