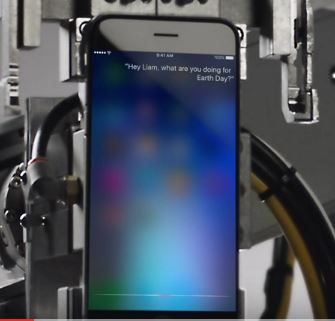 AppleInsider reports that Apple has celebrated Earth Day 2016 with the launch of two new adverts, one of which showcases the company’s commitment to reduce carbon emissions via its green data centers, and the other of which features Siri and Liam, Apple’s famous recycling robot.


The first advert, “iMessage—Renewable Energy,” shows how every time you send an iMessage it is routed via an Apple data center that is powered by 100% renewable energy.


In the cute Siri and Liam advert Siri and Liam argue with each other about how best to celebrate Earth Day, with Siri wanting to go grab an organic smoothie, and Liam preferring to concentrate on his recycling duties, which doesn’t end well for that particular Siri! Clearly Siri is still a little bit miffed at the rejection, as if you ask Siri what she thinks of Liam on your iPhone or iPad, she’ll reply “Liam is my new robot colleague at Apple. I’ve asked him to coffee but he’s kind of a workaholic,” with a link to Apple’s recycling website. Ask her again and she’ll tell you that she doesn’t think he’s much of an organic smoothie fan!


Aside from the two adverts, Apple has commemorated Earth Day in a variety of ways, including a tailor-made App Store section dedicated to “Apps for Earth,” with special “green” versions of several games and apps such as Hay Day, Hearthstone: Heroes of Warcraft, and LINE: Disney Tsum Tsum. Also, as we reported last week Apple has green-ified the Apple logos in many Apple retail stores around the world, and Apple retail employees are also wearing green shirts.