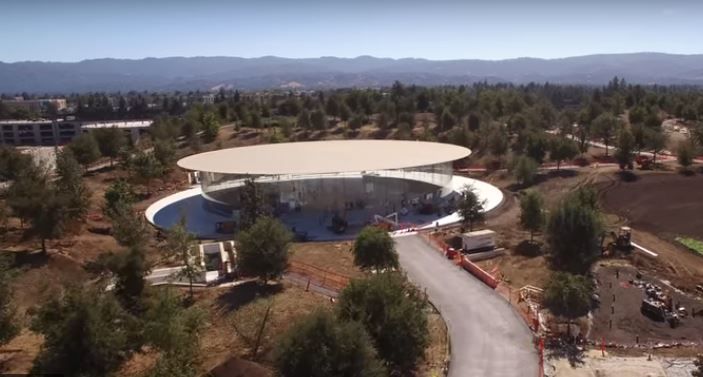 9to5 Mac reports today on some stunning new 4K drone footage courtesy of Matthew Roberts, which gives a great view of the atrium of the Steve Jobs Theater. It appears that the building work is progressing steadily, and in the video you can see some finishing touches, such as the solar panels that all appear to be in place. Once they are fully up and running, they will be able to generate 17 megawatts of power in peak daylight, providing approximately 75% of the power that the campus requires, with the rest of the power being provided by on-site fuel cells.

The theatre will be kept cool in the hottest months of the year by a ventilation system with natural airflow, aided by the window shades. With these measures in place, Apple thinks that no artificial heating or cooling will be required for 9 months of the year.

In the video, aside from lots of glorious footage of the main campus, you can also see two R&D buildings in the southern part of the campus, where Jony Ive’s industrial design and human interface teams will be based.