In 1983, Steve Jobs gave a speech to a relatively small audience at an event called the International Design Conference in Aspen (IDCA). The theme of that year's conference was "The Future Isn't What It Used To Be". 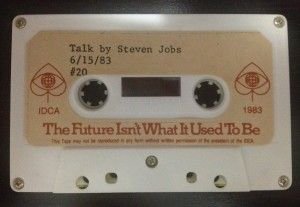 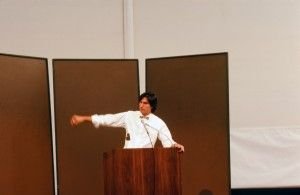 John Celuch of Inland Design, attended this speech almost 30 years ago and each attendees of the speech received a cassette tape copy. Incidentally, John met Steve Jobs at this conference. During their interaction Steve Jobs gave him something to put in a time capsule that was buried at the conference. To our knowledge this time capsule has yet to be dug up. 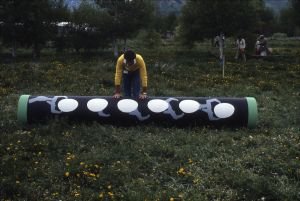 (This is the time capsule that holds an Apple Lisa mouse donated by Steve Jobs ; Photo courtesy of John Celuch, Inland Design)


During the speech, Steve Jobs talk about some things that were not fully realized until only a handful of years ago. This talks shows us just how incredibly ahead of his time he was.

And below are the main points that made by Marcel Brown:

1) He ( Steve Jobs)mentions that computers are so fast they are like magic. Marcel Brown doesn't think it is a coincidence that he called the iPad "magical".

2) He states that in a few years people will be spending more time interacting with personal computers than with cars. It seems so obvious now, but hardly a given back then.

3) He equates society's level of technology familiarity to being on a "first date"with personal computers. He recognized that technology would continue to evolve in the near future as would people's comfort level with it. In hindsight, once it became dominant the PC industry stood relatively still while Jobs was busy planning "the next big thing".

4) He confidently talks about the personal computer being a new medium of communication. Again, this is before networking was commonplace or there was any inkling of the Internet going mainstream. Yet he specifically talks about early e-mail systems and how it is re-shaping communication. He matter-of-factly states that when we have portable computers with radio links, people could be walking around anywhere and pick up their e-mail. Again, this is 1983, at least 20 years before the era of mobile computing.

5) He mentions an experiment done by MIT that sounds very much like a Google Street View application.

7) He says Apple's strategy is to "put an incredibly great computer in a book that you can carry around with you that you can learn how to use in 20 minutes". Does that sound like anything we are familiar with today? And they wanted to do it with a "radio link"so that people wouldn't need to hook it up to anything to communicate with "larger databases" and other computers.

8) He compares the nascent software development industry to the record industry. He says that most people didn't necessarily know what computer they wanted to buy. In contrast, when walking into a record store they definitely knew what music they liked. This was because they got free samples of songs by listening to the radio. He thought that the software industry needed something like a radio station so that people could sample software before they buy it. He believed that software distribution through traditional brick-and-mortar was archaic since software is digital and can be transferred electronically through phone lines. He foresees paying for software in an automated fashion over the phone lines with credit cards. And this sounds incredibly similar to the concept of the Apple App Store. Plus his comparison to the music industry just might be foreshadowing the iTunes store. You need to listen to the speech to hear the entirety of this passage for yourself.

9) Right at the end of the Q&A session, a question is asked about voice recognition, which he believed was the better part of a decade away from reality. Given the context of Siri today, it is interesting to hear him talk about the difficultly of recognizing language vs voice because language is contextually driven. He says, "This stuff is hard".

Source of article :
1) The "Lost"Steve Jobs Speech from 1983; Foreshadowing Wireless Networking, the iPad, and the App Store
Last edited: Oct 6, 2012
You must log in or register to reply here.

Steve Jobs Says that the iPad Came Before the iPhone!