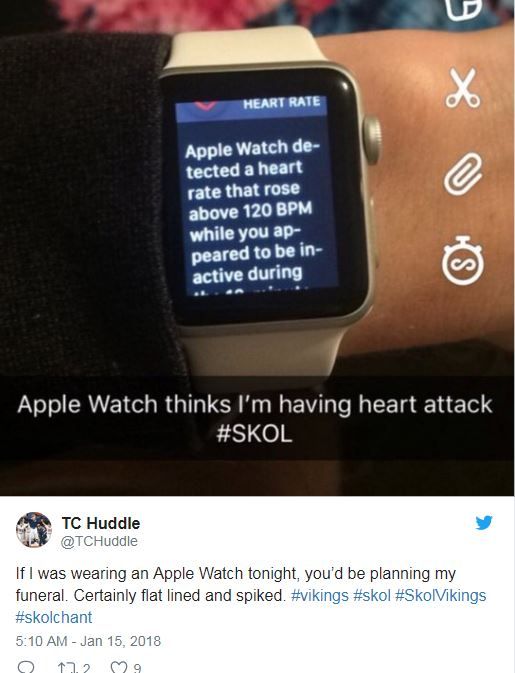 Last night’s post season Vikings vs. Saints game was such a thriller that it seems it actually set off people’s Apple Watch heart rate alerts, according to BGR. The upgraded heart rate warning alert was one of the very useful, and, in some cases, life-saving, features introduced in watchOS 4 last year. It alerts the wearer if their heart rate rises dramatically, especially when the wearer is in a resting state when the heart rate would not usually be elevated.

BGR’s Yoni Heisler writes that in the last few seconds of last night’s game, when the Vikings were behind by 1 and up against a third down and 10 from their 39 yard line, Vikings’ quarterback Case Keenum threw the ball to Stefon Diggs who made an incredible catch, then went on to score the winning touchdown. It seems that that incredible play not only caused the stadium full of fans to go crazy, but also the Vikings fans at home went just as crazy, thus setting off their Apple Watch heart rate alerts, with fans receiving messages stating something like, “Apple Watch detected a heart rate that rose above 120 BPM while you appear to be inactive during the 10-minute period.”

Lots of people took to Twitter to post pictures of their Apple Watch alerts. Good to know that the alert works, you never know when you might actually need it for real!

Source: The Vikings-Saints game was so crazy, Apple Watches told fans they might be having heart issues
You must log in or register to reply here.