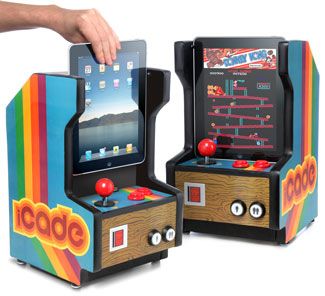 ThinkGeek has the perfect accessory to fit your retro gaming needs. Combine this classic style arcade mini-cabinet with the iPad and you'll feel like your back in the 1980s. Order today and have it delivered the same day as your iPad. Listed at $149.00, I put this on the must have list!

Enter the iCade iPad Arcade Cabinet! To use the iCade, gently slide the iPad into the docking cradle. The docking cradle uses a standard 30 pin connector to link the iPad to the professional-grade arcade controls. Once the iPad is in place, launch the iCade App (available free in the App Store April 3rd) and it's game on! We didn't want to take any chances you'd run out of juice during your favorite game, so we included a 10w USB power adapter so you can charge the iPad through any electrical outlet. Now you're all set to make an uninterrupted run on the Dig Dug World Record!
​
For more information or to place your order check out: ThinkGeek :: iCade - iPad Arcade Cabinet
G

lol, ya this was a good April Fools!
Y

LOVE IT! All we need to do is slant the platform and add 2 buttons on the side and play some amazing pinball

Dude, those are freaking awesome!

The real joke would be if someone built them and made million$.
L

LOL, they got me! That would be cool though!
I


Seadog said:
The real joke would be if someone built them and made million$.
Click to expand...

In fact the idea is really genius ... really need to be considered to be made ...
J

Remember the iCade? It was one of the few dozen of fake iPad arcade cabinets we covered here on MacStories last year. But while many of those cabinets will never see the light of day, or at least wonâ€™t ever be produced for public release, the iCade has become a reality that will ship to consumers this Spring. As reported by Engadget in their CES 2011 coverage, the Bluetooth-based controller will be available at $99 and realized by Ion, who has teamed up with ThinkGeek to make the iCade (which was born as an April Foolsâ€™ joke) a real, working peripheral.
J

Awesome!
You must log in or register to reply here.

M
iPad Arcade Cabinet Not Such an April Fool Anymore