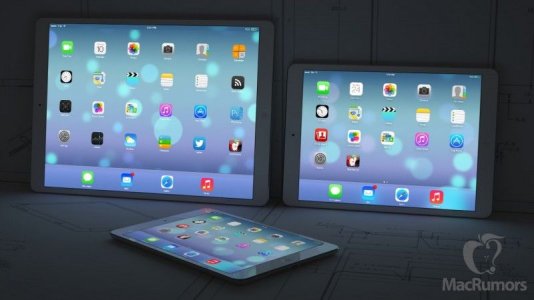 The latest rumor in the iPad playground seems to be related with its increased size. Now, according to a new report from DigiTimes, Apple could be looking to work with Taiwanese Quanta Computer company to develop a larger-sized iPad. According to the report, Quanta could mass-produce the tablet for the second half of 2014.

Aaron Lee and Joseph Tsai with DigiTimes say the following:

Quanta Computer has reportedly landed orders for Apple's rumored large-size iPad for mass production in the second half of 2014, while Inventec, Quanta and Foxconn Electronics (Hon Hai Precision Industry) are currently competing over Apple's iWatch orders, according to sources from the upstream supply chain.

Apple has been separating its orders among multiple ODMs recently and has given some of its iPad and iPhone orders to Compal Communications and Wistron, respectively. Apple is also rumored be planning to release a 12.9-inch iPad in 2014 with Quanta in charge of manufacturing the device, the sources noted.
Click to expand...

The report also mentions that Quanta could have difficulties when making the large-size iPad, since it would be a novelty for the iPad line. DigiTimesâ€™ sources also suggest that Apple's large-size iPad will target the education and enterprise markets.

Source: DigiTimes
You must log in or register to reply here.