I saw a post from instructables (I think) about how to make your own iPad stand from a block of wood. I just happened to have some oak scraps in the garage, so 15 minutes with a stable saw, some Danish Oil finish, and stick on felt strips makes this. Sorry about the grainy pics, the iPad replaced my fancy phone, so now I have this crappy LG to avoid paying a data plan.

Very nice! Looks just like the one that is sold by another guy...can't remember the product name, but he sells square ones, round ones, mini versions.

It looks sturdy too!
H

That oil finish gives it a great translucent effect.

ughh, dude are you so poor that you had to make a stand out of recycled wood?

and no, the finish doesnt give it any kind of "effect" other then to make it look like something that came out of the Salvation army...

with that said, props for the effort...
H

For oak you could give it a wash of Bichromate of Potash for a darker look or Washing Soda for a weathered look before you apply the oil.
OP
P

You must have a better Salvation Army than I have access to around here. Ours doesn't have hand made, solid oak furniture, or even scraps from such things.
OP
P

Here's a salvation army style light fixture I made from some of the same materials. Warning -slightly off-topic 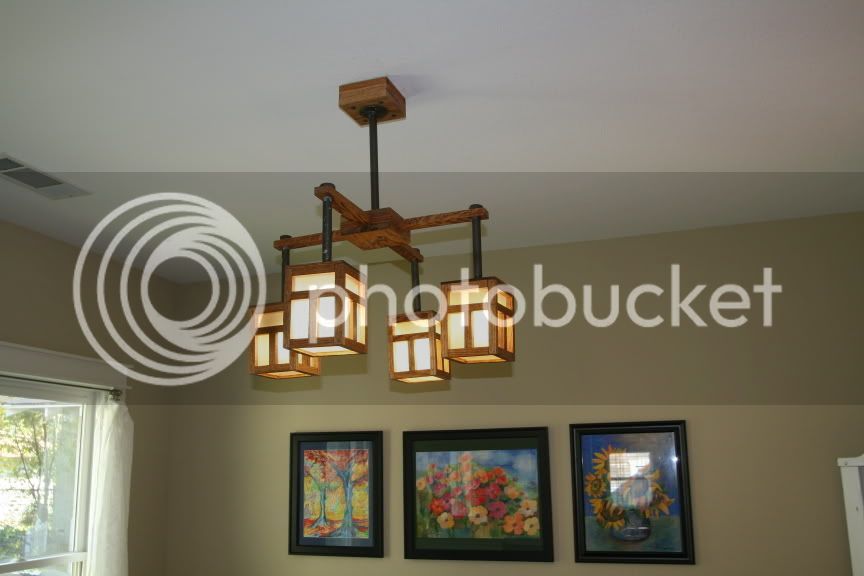 Awesome light fixture! And obviously your not, you got an iPad! And real nice house.
H

wow..that looks great and the lighting as well

@pallentx can you post the dimensions, please?
OP
P

Its made by cutting off about 3.5in from a 6" wide oak plank. (I think the actual width is slightly less). This is a standard width you can find at most lumber yards. You can make it wider if you want by cutting off a longer piece.

Then I set the table saw blade at a 27deg angle and cut off the tip of the block at this angle. This makes the front of the stand that is visible angle back.

Next I repositioned the guide to scoot over a bit and cut the grooves for the iPad to sit in. You need to back the depth off (using some scraps to test your depth). I made the first cut then repositioned the guide to make a second cut 1/16th in over, then kept moving the guide little by little to get about 1 1/4" gap. Then I set the saw back to 90 deg and adjusted the depth to match the depth of the angle cuts and continued the groove back little by little until I liked the angle the iPad would sit at.

Finally, I lowered the blade down, flipped the block over and cut a shallow groove to allow the sync cable to run under the block.

Currently, I'm looking for some kind of rubberized stick-on material to put on the bottom to give it a nice solid feel. Sometimes when I tap the screen the block will pivot from having a slick finished bottom and sitting on a slick finished desk.
You must log in or register to reply here.

Review of Cardinal Case for iPad 2