It's the Final Countdown ! Let the Celeberations Begin !!

Apple on Friday began redecorating San Francisco's Yerba Buena Center for the Arts with a massive, colorful banner featuring the company's
logo ahead of next week's media event.

Workers began covering the glass windows on the center Friday morning in California. Apple typically hypes its product unveilings with
decorations throughout the center.

As of Friday afternoon, workers were about halfway done with sticking the design to the center's windows. This year's graphic is a mix of
vivid colors in the background, with a giant white Apple logo up front.

The bright colors and what appear to be paint splatters in the design are somewhat reminiscent of the theme for the media event Apple held in
early 2010 to introduce the first iPad. As rumors of an Apple tablet were swirling, Apple invited members of the media to "come see our
latest creation."


This year's invitation features a picture of an iPad with a fingertip touching the iOS Calendar application icon. The date on the calendar is Wednesday, March 7, which is when the media event will be held.

Apple has unveiled its previous two iPad models in events at the Yerba Buena Center. Last year's decoration was a black Apple logo on a white
background, surrounded by colorful dots.


Invitations to last year's event featured the iOS calendar icon peeling back to reveal an iPad. It invited members of the press to "come see
what 2011 will be the year of," and at the event Apple declared it the "Year of iPad 2." 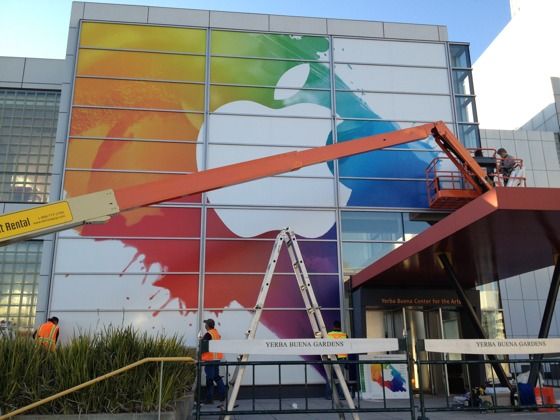 The fact that the 2012 invitation says that attendees need to "see" this year's update has been viewed by many as a reference to the
high-resolution Retina Display that is expected to be one of the defining features of the next iPad. There has been mounting evidence
leading up to this year's event that the so-called "iPad 3" will feature a 2,048-by-1,536-pixel display, doubling the resolution and
quadrupling the number of pixels of previous iPad screens.
Last edited: Mar 3, 2012
You must log in or register to reply here.

Yerba Buena Center for the Arts being prepped