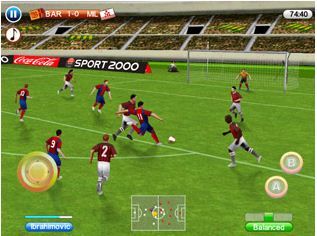 In celebration of the iPadâ€™s launch in nine more countries (France, Germany, Italy, Spain, the UK, Switzerland, Canada, Japan, Australia) on May 28th, Gameloft has announced that it will be releasing seven new iPad titles: Blokus, GT Racing: Motor Academy, Real Football 2010, Chess Classics, Brain Challenge, Gangstar: West Coast Hustle and Real Tennis. All the titles will be available in early June, and will range in price from â‚¬3.99 to â‚¬7.99. They join the catalogue of games already available on the iPad, including N.O.V.A - Near Orbit Vanguard Alliance, Asphalt 5, Hero of Sparta, UNO and Iron Man 2.

â€œ"The iPad is the most user-friendly portable game platform available that will once again transform your experience with digital and downloadable games. We've supported the iPad since its launch in the U.S. in early April with titles that have garnered critical acclaim. We're eager to expand our selection of games for the launch of the iPad in these new territories," commented Michel Guillemot, president and founder of Gameloft.

Check out the video after the jump!

[ame=http://www.youtube.com/watch?v=NkzVgF0gpHQ]YouTube - Gangstar: West Coast Hustle for iPad - Trailer by Gameloft[/ame]
You must log in or register to reply here.